From our Summer issue of SUP International, we look back at this story about Kiel, Northern Germany, where Paulina Herpel, Valentin Illichmann, Klaas Voget and Michael Walther meet for a special SUP tour around the City! 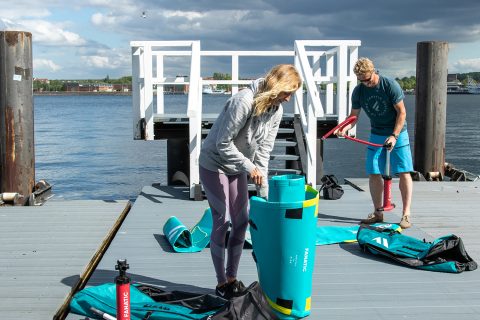 241m long, almost 30m wide and several storeys high. Or for us Stand Up Paddlers 790 feet long, 1181 inches wide and a volume of about 163 million litres. Fortunately, these are not the dimensions of the Fanatic Fly Air Pocket SUPs, but the rough data of the “Stena Scandinavica”. That is the ferry that commutes daily from Kiel to Gothenburg and makes the acquaintance for Paulina, Valentin, Klaas and Michael during their tour. 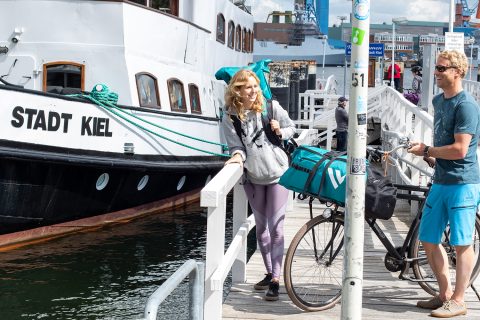 But let’s start at the beginning. The summer has finally reached northern Germany. In the canyons of houses in Hamburg, the air is thick and temperatures are up to 35 degrees, so Valentin and Paulina are drawn out towards the sea. Boards on their backs, they are taking the train direct to Kiel to go for a SUP trip with their close friend Klaas Voget. Their other paddling companion, Michael is already waiting there and collects them at the train station. They go directly onto the small fjord ferry out of the city centre. These small ships partly replace the busses for the people in Kiel and must be part of a real Kiel-Tour. On the east shore Klaas iswaiting and from here they planned to start their SUP tour. 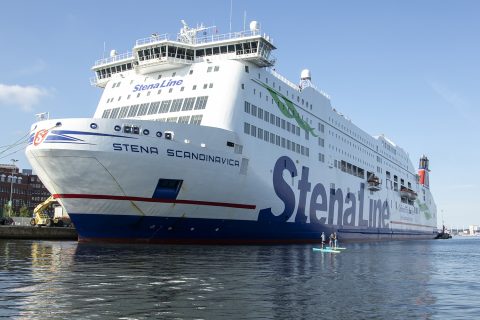 Close up with the Stena Line!

The conditions looked perfect and so they quickly pumped up their SUPs. Paddling in Kiel means to have a close look at big ferries, cruisers and lots of sailboats. Their route goes from the city centre direction Baltic Sea, along the famous “Kiellinie” with its rowing clubs, marinas and beach bars, where Kiel residents and tourists enjoy the sunny evenings. They pass submarines, docks and ferries connecting Germany and Scandinavia. 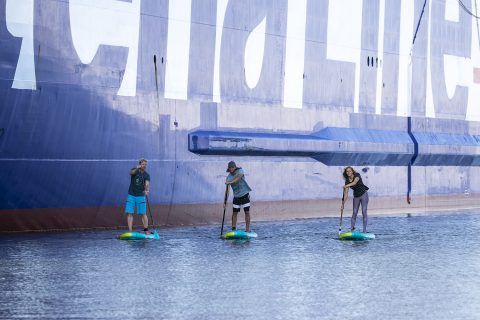 Even from a distance these ships look huge, but when paddling with 10m distance, it is simply impressive! Even more impressive is the “fog horn” that you hear when passing the “Stena Scandinavica”. The ship wants to leave, but Michael was so engrossed in his role as a local tour guide that he lost sight of the departure time. The lines are already loose and so they had to to pull through properly to clear the way. Before such a 241m long ship gets going, it takes a moment. Just enough time for them to turn around and paddle towards the exit of the fjord. 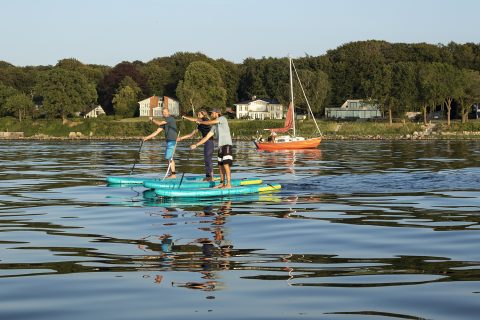 After this little intermediate sprint they had enough of the city stress, time to relax. They passed the State Parliament, anchored boats, cafés and small city beaches, where Kiel citizens and tourists enjoy the sunny summer evening. A few sailing boats drift over the fjord. The conditions are definitely more for SUP than for sailing, the evening calm has the Baltic Sea firmly in its grip. 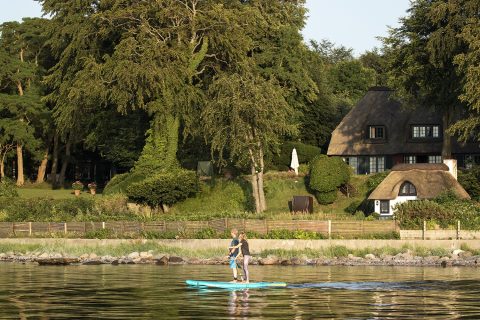 A stunning windless evening to enjoy the sunset on the water. Shortly after the sun has disappeared, they go ashore in Laboe, a little suburb outside Kiel. We let the air out of our boards to go home again by fjord ferry, bike or train. It simply cannot be more relaxed than this! 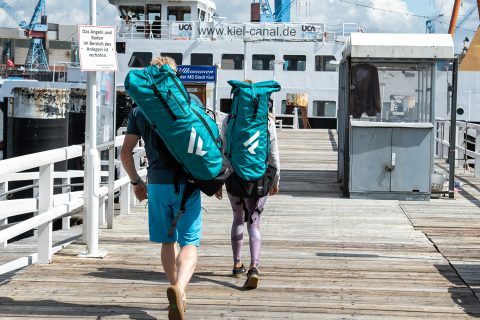 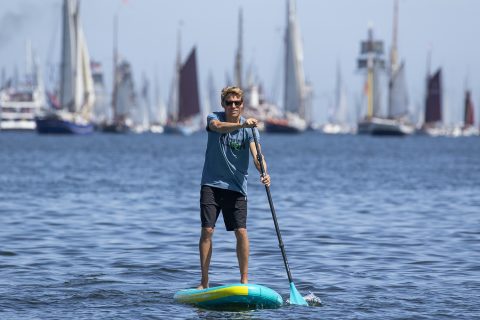 Kiel is the capital of the northern German state of Schleswig-Holstein and boasts a population of around 250,000. It lies around 90km north of Hamburg and due to its location on the Baltic Sea Kiel has become one of the major maritime centres of Germany! 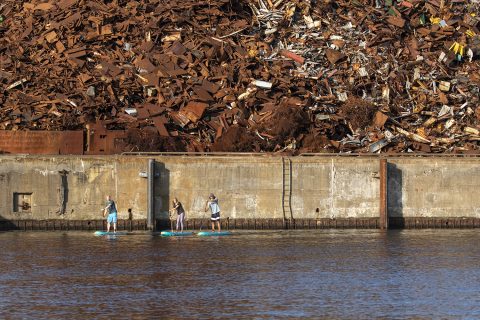 Kiel is also known for its international sailing events and boasts one of the biggest regattas in the world, the annual Kiel week. Situated right on the Baltic Sea, it is the last stop on one of the busiest artificial waterways in the world, the Kiel Canal. The harbour is located just behind the main train station so you are greeted by the Blatic Sea as soon as you arrive in town! 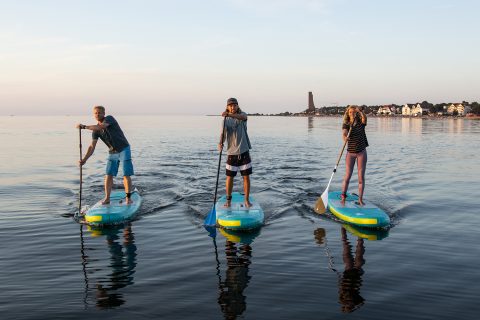 Paulina: “Nothing like a quick ride with your SUP and public transport to the spot? Inflatables have always been good for spontaneous actions, however the new Pocket Airs make it even easier.“ 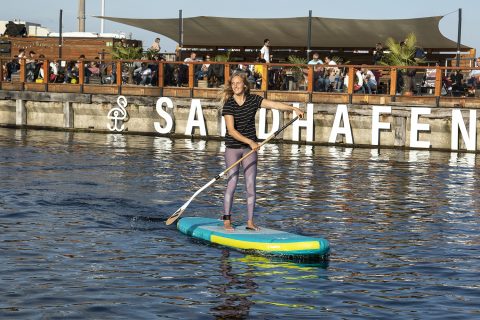 Valentin: “The beaches are right in the city centre and only a stone’s throw away from the cruise ships. Kiel may not be the prettiest city, but it definitely has a very special atmosphere – worth a SUP trip in any case.” 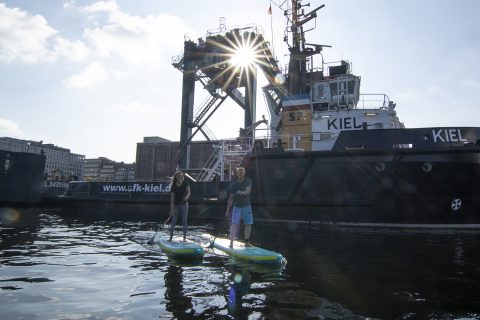 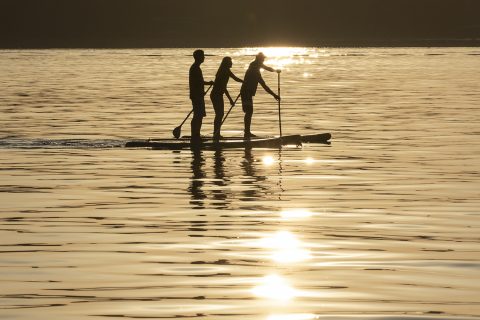