It’s deep winter. Boots, gloves and hood are ready to go…, but I have been very fortunate and grateful this year (thanks to some awesome support from my key sponsors ION, Fanatic SUP International and Nik Baker K66) to have not needed the aforementioned items – yet.

The winter in Portugal this year has been warmer than most in recent history, and has seen an incredible run of surf from October to the New Year. I am primarily in Portugal for the madness that is Nazare, surfing silly sized waves, driving ‘Jetskis’, and running rescue for those that require it. But when the swells are not gargantuan the inflation vest, ski and 12kg tow board (among all the other esoteric bits of kit) get a rest, and it’s back to ‘normal’ surfing.

Many of the big wave surfers don’t hang around if it is under 10ft. When the Atlantic hits a dormant stage a fair few will head to the Pacific if it’s on. Dormant in this case meaning not huge, but there are normally still plenty of smaller wave options. The storms that tend to run aground in the UK are what send the lines of swell down to Portugal’s Iberian peninsula. The peninsula is usually just far enough away to avoid the ferocity of the low pressures, whilst still reaping the fruits of its labour in the form of groundswell. I think I already mentioned that it’s a bit warmer too.

Portugal has a lot of right hand waves as the swell comes from the NW and peel down the coast. If the storms stay north then a settled wind pattern can set in and this is what happened for these sessions, giving many windless or light offshore days. Paddling an intense session would see you only needing a 3/2 and no boots, but if you want to stay out for more than an hour then 1 mm more will do the trick. 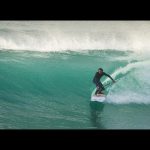 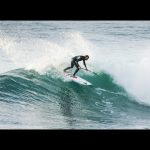 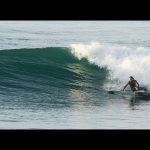 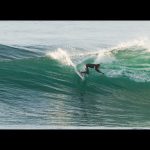 The country has seen a dramatic influx of Northern European surfers and visitors, the draw of the warmth without an excessive flight time (it’s even drivable over a few days), and of course the beaches and waves. There are plenty of popular hot spots, Peniche and Ericieira to name just a couple but also plenty of quieter options around and in-between. Away from the hotspots I haven’t come across many sup surfers though; there are some Portuguese shedders coming through the ranks at the moment and I am looking forward to going along to couple of the Portuguese SUP events to watch them shred before I head back to the UK in the spring. A favourite spot of mine involves a bit of hiking (always fun with a standup) which always amuses my short boarding buddies. My first time there I suffered the twin challenges of being foreign, and even worse, being on a sup. But with a little ‘respeite’(respect) and humility, pre-judgments were soon forgotten and all was well, I even made a few new Portuguese friends too.

On a recent jaunt to this place we arrived to find there was no one in the water: that alone made it worth going out for sure. We cast our eyes over the small bay with sand banks behaving like reef break points. I haven’t seen, or surfed many set ups like this that haven’t come packaged with a ferocious rip, but luck of the Welsh (supposed to be Irish, we’re just the ones that could make it across) was with me and I had an hour of solo session bliss as my buddies chose to surf the other bank across bay, imagine what that was doing! Surfing a wave that is so mechanical; in that each wave in each set broke in the same way, can allow you to really work on different elements of your surfing. For me, this session was all about frothing all over everything that moved, and not really thinking too much about it. There are certain drawbacks with too much froth, especially when there is a solid hike at the end of the session to contend with. A pair of very fatigued legs is also an occupational hazard of the lower volume sups. Nevertheless, it was categorically worth it, and a couple more visits were made.

Seek and ye shall find and all that, but don’t over froth else the walk back will be murder…  SUP INTERNATIONAL