Flung far out into Norwegian sea, the Molde Archipelago forms part of Norway’s Romsdal Peninsula, the corner’ of this long, tall country that marks the division between the lower regions and the long run up north. Although it sits at latitude 62 degrees north (Anchorage, Alaska is 61) Molde is caressed by the same Gulf Stream that warms Norway’s British neighbours to the south west. It’s mandatory that you’ll bring your paddling kit, but can we also make a strong suggestion to bring a fly rod too? The fishing is quite literally ‘off the hook’…

It takes less than ten minutes, and the camp’s protein quotient for the evening is hanging on the hook. Pollack, cod, bronze, silver and slab sided; the yield for dinner can already be seen from the shore.

But Kai-Nicolas Steimer and Martin Öser are still a few minutes away in the small boat on the mirror-smooth Moldefjord, right in front of our boathouse, ten kilometers west of Molde. The two amateur fish botherers feel like primitive explorers who’ve lucked upon an abundant, virgin resource. No sooner have they cast out their hooks can they sense the fidgeting throb of a biting fish on the line. “This is fishing for beginners,” muses Kai. That Norway’s fjords are a paradise for anglers, is known. But that it would be so easy? Hmm…

I could happily continue with tales of the fishing out here but that was not our primary reason for the trip. Rather, we are out here to explore Norway’s wild beauty from the decks of our boards that have come to mean the world to us. Thomas Wendt, strong in his middle-age, once a passionate windsurfer, has found his new passion in and with Norway the perfect playground for his camps. He has a headful of memories from childhood holidays spent in the small huts of his Norwegian friend and marine biologist Trond Haukebø. “But back then, we were mainly hiking and boating”. His idea is to use Trond’s small huts with the boathouse and the jetty as base camp from which to launch paddleboard campaigns into the rugged coasts and majestic fjords of the northwest of Norway.

In the camp, everyone cooks together. As much stuff as possible is locally sourced, mainly self-caught fish in combination with local ingredients, where possible from organic farms. Only the breakfast cereal that Thomas produces is brought from home. “Norway does not necessarily mean SUP or sustainable travel. Rather, one thinks of hiking and adventure, mountain biking or fishing. But most fjords have little to no current and the many small rock islands are perfect for SUP excursions”. And it’s not just the fjords that promise potential: different rivers and also the waves of the Atlantic on the coast are only an hour’s drive away from the basecamp. At the pilot camp about 500 kilometers northwest of Oslo, Kai and Martin are joined by Catherina and Morten Korsgaard from Denmark, Thomas’ buddy Dirk Wortmann and fitness coach Svenja Sörensen. Translated, Molde means “topsoil” and as it suggests, the area around the 26,000 inhabitant city is quite green and varied, which is also related to the relatively mild climate for Norwegian conditions due to the Gulf Stream: even roses are in bloom up here! But Molde is perhaps even better known for its annual jazz festival, one of the most famous in the world (of jazz). 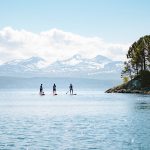 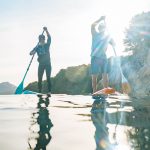 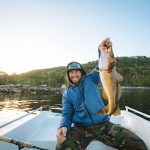 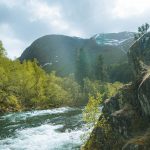 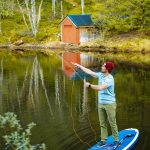 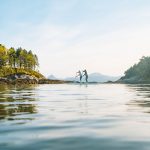 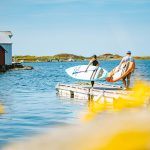 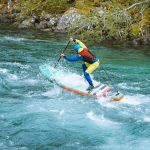 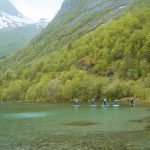 The next morning, low-hanging, grey clouds are obstructing the panoramic view from our house of the snowy peaks at the southern end of the fjord. We decide to turn inland and set off for the river between Eresfjord and Langfjord, some 50 kilometers away in search of a stretch that is still passable. But a problem presents itself: many smaller rivers in Norway are privately owned – and to protect against epidemics and parasites that endanger the salmon population, access is often prohibited.

The problem is that the parasites and invasive species are transferred from a host river into a not-yet infested river. This is why anglers are required to disinfect their fishing tackle, and kayakers and stand-up paddlers too, before switching from one river to another. We haven’t even launched our boards in Norway yet – but we all know how sensitive everyone here is response to this problem. The flow at our point of embarkation starts harmlessly enough but in the middle of the river the water foams and swirls and rocks directly under the surface throw up short waves.
Catherina, Morten, Martin, Dirk and Thomas unpack their boards and assemble on the bank. Only Kai-Nicolas has the necessary experience and equipment (helmet, impact protection vest, throw line) to take on the white water section.

The next day, the sun lures us out of bed at six o’clock in the morning. It’s only the beginning of May, the Scandinavian Midsummer Festival (June 21) for the summer solstice is still six weeks away, but already the darkness of the night displaces the daylight for five hours at the most and even then it doesn’t get beyond astronomical twilight.

After a morning session right in front of the boathouse we spend the afternoon touring along the shore on the ten kilometers voyage towards Molde. A light wind assists us from behind, while a hundred meters outside of us in the fjord a ship called Hurtigruten overtakes us. She’s also on a tour but hers will go a lot further than ours: the ship is headed deep into the Arctic Circle to the North Cape of Norway. Back here on the rocky coast, small and large wooden houses are scattered about – painted in bright red, yellow, green or sometimes discreet anthracite, and all with a high envy factor: unobstructed water views, forever. And most of them even come with a pier for your own boat. We paddle to the football stadium, which is located directly on the water in the center of the city. In Germany, we pack into crowded subways to get to the stadium, here, the fans come to the home games by boat, yet another contrast in Norwegian life from everyday life in Teutonia. The way back with headwind turns out to be quite exhausting, we load the boards on the car roof and shuttle back to our huts. Apparently the sun does not want to go down, and so we fish for our dinner together right by the boathouse until almost 9 pm, SUP style, castling our lines directly from the board. SUP International