We last caught up with Ginnie Betts at the end of 2018 to delve into the secrets behind her performance, mindset and skillset. Three years later Ginnie has been through some tough times – aside from the pandemic – and tells us how SUP and living close to the sea in Cornwall has helped her pull through this difficult year.

My pandemic experience was tough… attempting to home school 3 boys, whilst working from home.  This was compounded by also having to navigate a very difficult divorce and two house moves – one at the beginning of lockdown April 2020 and once more at the end April 2021. Everyone suffered as a result of the pandemic in different ways – for me, too many stress factors collided at once and although I got through it, it definitely affected my wellbeing and mental health.

During the first lockdown, there was this strange watersports ‘vigilante’ movement, so I went out on my prone board, instead of SUP, as this felt a little more low-key.  Once everyone had calmed down and common sense was restored, I gravitated back to SUP. 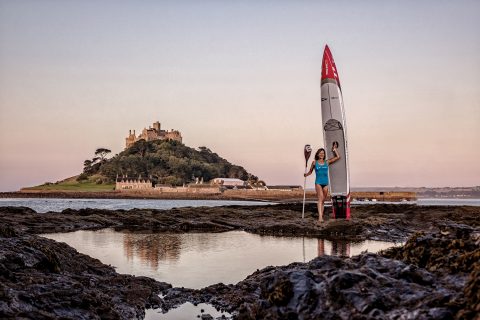 Living in Cornwall was a blessing. Being able to access the beauty of our beaches and expansive outdoor space, if only for limited periods, kept a lot of people I know sane.  During a period when normal life was constrained and we were all forced inside, living in a County whose wealth lies outdoors was utterly precious. My heart went out to those families going through lockdown in cities as that is a totally different world and scenario.

The first lockdown was contentious, with different people interpreting guidelines differently.  No-one was specifically banned from the water, but a lot of people felt peer pressured not to go out, or socially stigmatised if they did.  I just carried on because I could didn’t buy into the logic of the argument to stay off the water, it felt more like fear mongering and control. The science later proved that it was more dangerous to stay indoors given how Covid is transmitted. The subsequent explosion in SUP, with numerous press articles describing it as the ‘perfect lockdown activity’ seemed to tally with my position.

As a novice surfer, I had never seen the line up so crowded.  The leisure arm of SUP also exploded – inflatable SUPs are everywhere now! Escaping the crowds is not difficult in Cornwall. There are so many different beaches, estuaries and coves to paddle from. I also tend to paddle relatively far offshore and go out in most conditions (don’t try this without the right skill set – get some coaching!).  There’s plenty of space once you get past the shore break.

SUP has always conferred mental health benefits, but yes, especially so during the Pandemic when stress factors were compounded. It’s the perfect lockdown antidote and has always been an effective form of social isolation! I paddled both for fun and for training. In summer 2020, a small crew of local paddlers, prepared for and competed in the virtual Molokai.  It was a great opportunity to study local tide and wind patterns, and experiment with different downwind runs to see which yielded the most speed. We all had an amazing time in our own backyard. I managed to claim 3rd in my class worldwide with a paddle from St Ives to Perranporth on the North coast of Cornwall. Wind and tides were good that day, but the sea state was really challenging – my balance on a 21.5 race board really improved over the last year. 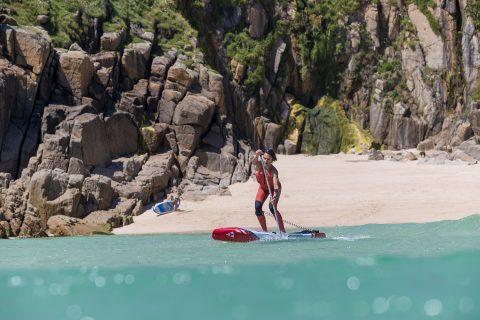 As for other paddling sports, there is something deeply satisfying about learning to move across the surface of the ocean under your own strength.  I love learning to read the patterns on the water, I love the peace, the solitude, the exercise, the escapism. I love how weather and tide enmesh differently every day to ensure that no two paddles are ever the same. I love the mental focus it requires and the consequent calming of the mind, especially when paddling in difficult conditions.

As a mother, it’s so easy to ‘lose your edges’ and identity, as life can become so bound up with your children and domestic life. SUP provided a vehicle for me to remember who I really was and who I want to be.  It came at just the right time. I’m grateful for the discipline it provides.

I’ve certainly missed meeting up with my friends from the SUP race scene.  I missed having clear goals to train for. This season I have raced intermittently, but not as intensely as in previous years. Unfortunately, 2021 has dealt a few life blows, which prevented me from making racing a priority this year, but that’s OK.  There’s always next year. 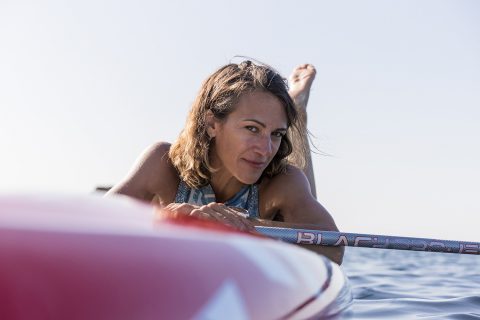 I’m a (single) mother to three boys, I work for the Cornwall Council and freelance as a SUP instructor for WildCove Paddleboarding, a business I set up with SUP partner Bella Rdzanek. Life is full. I was raised in Cornwall, but I was into dance and gymnastics. I didn’t get into paddling until my late 30s, when I returned to the County, after having lived for far too long in the City following my university days.

I was introduced to SUP later in 2013 by a local instructor, Lawrence Smith, who works from Marazion Beach. I was introduced to SUP racing in 2015, when a leg of the Euro Tour was held at Carbis Bay. I was totally entranced when watching the races, it all seemed so dynamic, skilful and fun – I just knew I wanted to try.

Living close to the coast is everything. I couldn’t live inland again now. I feel like I hardly recognise the person that I was, who was content to live in a city. My true self belongs by the sea, I don’t want to be anywhere else again now, this is home.  My favourite local places are the South Coast between Porthleven and Marazion – it’s full of little coves and interesting coastal features. I love paddling around Porthcurno towards Lands End – as that stretch of coastline is stunning. I also enjoy training on the Fal river estuary, known locally as the ‘Cornish Amazon’ because of the lush greenery surrounding its banks. When I have more time I’d like to paddle the whole of the Cornish coastline, it’s so diverse.

Chris Freeman, who heads up Black Project, has been so supportive over the years with the awesome paddles and fins his company produces. I approached Black Project, initially because I had a shoulder injury and found that their paddle design was a lot kinder on the body. Their fins make a significant difference to speed.

I first met the SIC team in the USA at the Pacific Paddle Games, 2018.  Mike Eisert and Anthony Scaturro, who were heading up operations, and they so kindly leant me a board to compete with. I did way better than I was expecting to, particularly in the distance race. I fell in love with their RS race boards right away, their glide, manoeuvrability, speed and general ease of handling on the ocean is second to none. Thomas Beaton of MaxxTrac is the UK distributor and I enjoy working with them too. 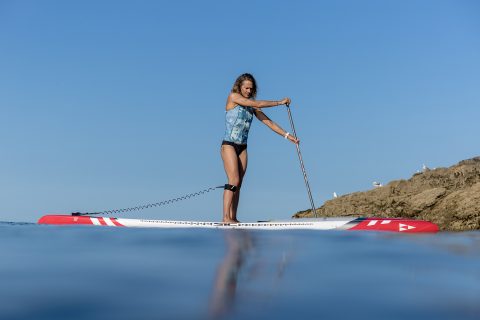 I follow the PaddleMonster training programs… Seychelle was my coach for the first 2 years that I was using the platform, and she saw me through to achieve a top 10 place at the ISA World’s in China 2018. Seychelle has since moved on to other ventures and although we stay in touch as friends, I have Larry Cain as my online paddle coach now.  As a former Olympic athlete, he’s incredibly knowledgeable and explains everything brilliantly.

Going to the world championships was such an exciting experience with an incredible team. To do so, as a mum of three, in her forties, made it all the more special – you think that opportunities like that have long since expired, so I relished every moment. The Hainan province in China is truly beautiful and it was an incredible buzz to meet, compete and socialise with paddlers from all over the world.

What have been your stand out SUP moments? 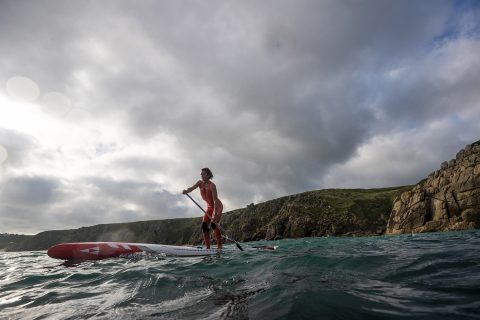 It’s an imperfect juggle, sometimes it works, sometimes it doesn’t.   Training time is snatched early morning, late evening or lunch times – whenever there is a spare moment basically. When you have kids, and work responsibilities, there is always something coming up to scupper your plans, so sometimes you flex and accept it can’t be done, or sometimes you’re a little selfish and prioritise that hour to yourself anyway.  Like any parent-athlete, I always wish I had more time to train instead of cutting corners, but it is what it is.

When I got back from the World Championships I was invited by some women’s business and networking forums to speak for them. I had to overcome quite a lot of challenge to get to that competition, and be able to represent my country, people seem to appreciate the backstory.

I want to keep developing my teaching and coaching skills. Making SUP accessible to others for its physical and mental health benefits is close to my heart. I also want to get back to travelling and racing again when life allows – purely because it is so much fun 🙂 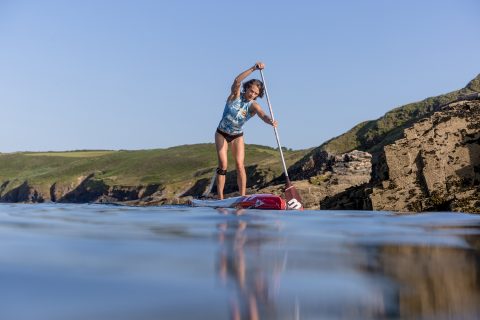 I always try to encourage other women into SUP. It was another woman who encouraged me to try that time I was stood watching the Euro Tour at Carbis Bay. I had told myself it was too late for me to get into something like that. She challenged that assumption and I’m eternally grateful that she did.  Your mind and body can do more than the limitations you place on yourself, no matter your age.

WORDS TO LIVE BY

Treat others as you would have them treat you.

« STARBOARD WHOPPER 10’0 TEST REVIEW
PADDLING THROUGH THE PAST: SAN FRANCISCO »