There has never been a better time to explore the coast and waterways of the UK and with SUP, we have the perfect vehicle to venture out and experience some of our countries most beautiful locations. Fresh out of lockdown, John Carter headed down to Weymouth to hook up with paddlers Joe North and Bryony Webb for a SUP mission down to Durdle Door. 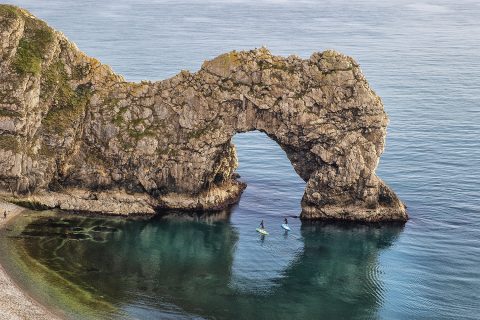 I had been patiently waiting for the right window of weather for a few weeks to organize a SUP mission down to Durdle Door in Dorset. They key to unlock any attempt was the right wind. I had in my head one of those surreal glassy evenings to explore this stunning section of the Dorset coast so we would need the perfect forecast for me to pull the trigger on the mission. The plan was to blast down in a RIB from the Official Test Centre run by my good friend Tris Best for a SUP adventure around Durdle Door and of course explore anything of interest on the way back.

Forecasts seem to play all sorts of tricks especially as we are rolling out of winter, through spring and into summer. Fog for one can spoil the party as well as unexpected breezes and of course clouds when clear sky is predicted. As a photographer I wanted to tick all the boxes if possible and capture some epic pictures in front of this incredible back drop with calm conditions and golden light… Surely not much to ask in the middle of April! Finally, the ideal day seemed to be looming up with light winds and blue-sky forecast. Tris had a RIB organized and loaded with two of the latest Aztron inflatable boards – a Mercury 10’10 and a Super Nova 11’ – along with the two willing SUP volunteers Joe North and Bryony Webb. 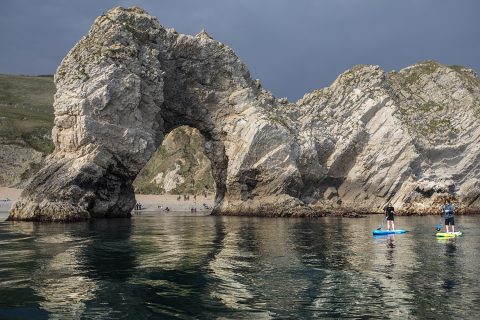 Just as I was about to set off from the Isle of Wight the forecast threw in a late curveball. The wind was still light but suddenly the word for the clear sky that was predicted had back peddled into complete cloud coverage. I was already committed and it was too late to go back, so headed on my journey with my hope of scoring any epic SUP shots vastly diminished. Having said that I was still set for a proper adventure down the Dorset coast to one of the most spectacular landmarks on the UK coastline, so the outlook wasn’t all bad. Looking at the live satellite weather picture, the outline of the UK was almost completely hidden by a thick blanket of clouds but by late afternoon anything could happen. By the time I reached Weymouth around 3.30pm there was a glimmer of hope with a few tiny cracks showing in the ominous clouds above. We decided to press on and headed out in the boat through Portland harbour into the gloom towards Durdle Door. We passed the magnificent Britannia cruise ship on the way down the coast anchored up in Weymouth bay as well as the Azura parked up closer towards Overcombe. Even with the cloudy skies and mizzle the coastline looked spectacular with giant cliffs and amazing rock formations. 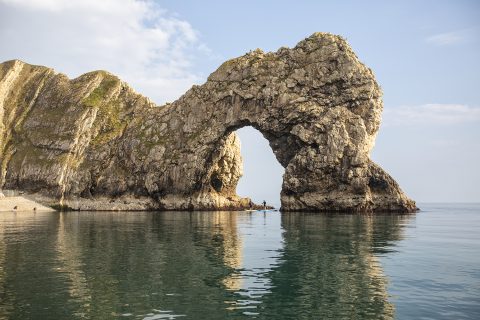 SUPing through the Door

Durdle Door is one of the most famous stone arches anywhere in the world. The actual arch which stands around 200 feet tall was formed when the sea pierced through the Portland limestone rocks over 10, 000 years ago. The iconic cove is a well visited tourist destination and made the headlines in the news last summer for all the wrong reasons. Curving away from the arch is a shingle beach backed by the magnificent cliffs of the Jurassic Coast. The arch will not be there forever and will eventually be eroded into a stack, similar to those at Ladram Bay in east Devon. We were lucky enough to be arriving by RIB which was quite luxurious on this clam afternoon with the added benefit advantage of the incredible views from the water looking back towards the land. 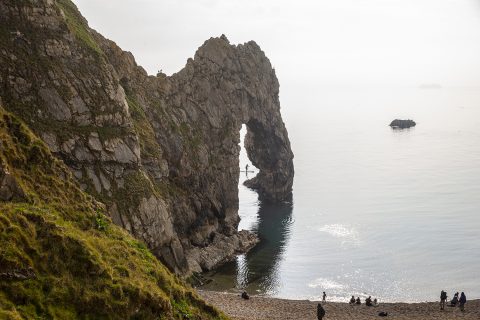 As luck would have it an approaching pocket of clear sky shimmered from between the dark clouds and as Joe and Bryony hit the water we were greeted with a window of beautiful sunshine. With the stunning landmark jutting into the perfect calm water it was a joyous evening to be paddling at Durdle Door. Joe and Bryony made laps around the bay and through the arch as I grabbed as many shots as possible in the short window before the sun disappeared as the next bank of dark clouds rolled in.

Looking back up the coast we could see that the Britannia lurking out in the bay was about to be bathed in sunshine from same patch of clear sky that had just passed over us. Over the land where the clouds were emanating from it looked black and gloomy so we made a hasty decision to jump back in the boat and chase the down our little hole in the clouds and hopefully score a paddle around Britannia.

The Britannia is the flagship liner of the P&O fleet. Her maiden voyage took place in March 2015 and was featured heavily in the news with the bright Union Jack painted on the hull as a distinguishing trademark. The ship is 329 metres long and boasts 13 decks which accommodate up to 3647 passengers as well as a further 1350 crew! Since the pandemic, many cruisers have been simply anchoring up in Weymouth, Poole and off the Isle of Wight like ghost ships with skeleton crews onboard. On certain days last summer there were five or six cruise ships in Weymouth making for quite an attraction from the land. 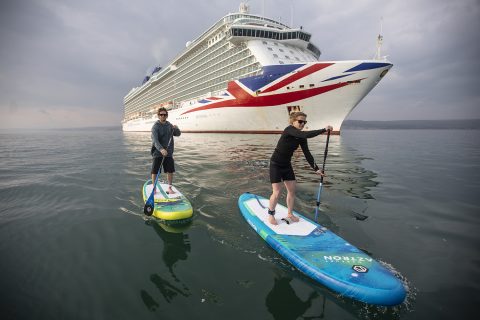 As we pulled up, we were just in the nick of time to snatch a few minutes of sunshine and once again Joe and Bryony hit the water for a paddle, this time right next to an enormous ship. Up in the bridge it looked like the captain and his crew had their binoculars firmly fixated on our antics but on closer inspection they were pointing beyond us on a pod of dolphins cruising through the becalmed waters of the bay. Obviously, we made sure to stay at least fifty metres away from the boat as we didn’t want to upset the captain. 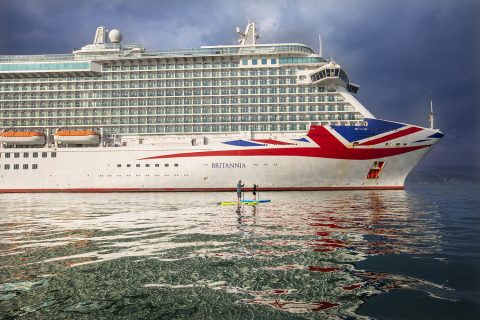 The sense of scale was incredible as Joe and Bryony paddled up next to this mighty cruise ship glistening in the golden light on their tiny Aztron inflatables. We were joined by a few tour boats who were showing a few lucky people around on this glorious calm evening.

At the start of the day, I would have said we were totally unlucky with the weather but as it happened the skies had opened twice for us allowing some beautiful light to shine down on the SUP action. Either way it was an awesome experience being out on the water up close to a natural and man-made wonder of the world. It was perfect flat water SUP conditions, even out in the bay which is normally quite choppy in any flicker of a breeze. 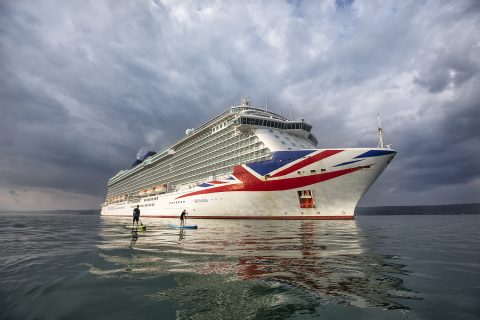 With the sky darkening we headed back to the OTC where both Joe and Bryony could get changed and warm up as after all it was still mid-April and there was a chill in the air. By the time we were back to base the atmosphere felt totally still and the water was perfectly mirror flat. A couple were out on the water on their boards cutting through the water in perfect tranquillity. It was just as I had imagined, the perfect evening for SUP and even though it wasn’t sunny there was an eerie warm light that was almost even better. 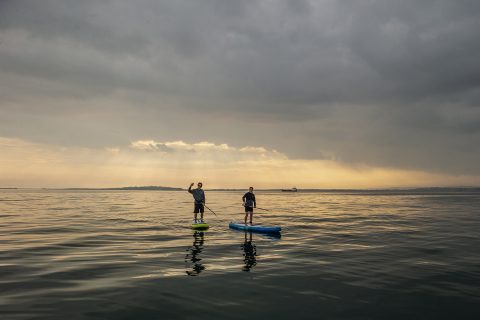 Like I mentioned at the beginning of this story, this is the best time to explore our own waters and Britain’s coastline has many natural wonders and incredible places you can safely explore by SUP. I for one am already looking forwards to me next UK SUP mission.