I think everyone knows that Maui is the final word for people who have at least two ways of propelling their boards across water. If you have not been there yet, you definitely should, it’s not all Jaws and nuclear force winds on the spiritual home of stand up. Take your board and slip into some moments of pleasure.

My first trip to Maui was in 2004. I was living in Honolulu for a few weeks to improve my English and made friends with a few surfers and kitesurfers. They were planning to fly to Maui for a few days, I was able to join them and this trip literally changed my life. I was a die-hard snowboarder from Switzerland, but so far the ocean was not that interesting to me. I’d had a few goes on a longboard at Waikiki Beach but when I saw the first kitesurfers on Maui I was totally impressed. I wasn’t able to learn that summer but one year later I went for a three month trip to Cabarete, where I was finally able to learn how to kitesurf. Life had a very interesting path for me, because 7 years later I was able to become turn professional and started competing at the freestyle world tour. Over the years I’ve returned to Maui many times, also discovering sup for myself there. One of the first things I learned was that you do not need to be afraid of the conditions in Maui. Yes, Maui is famous for its big waves at Jaws, Ho’okipa or Honolua Bay but there are so many great spots for cruising and spots where you can slowly improve your riding. 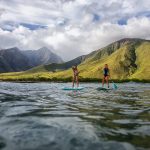 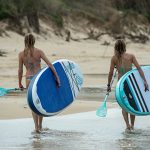 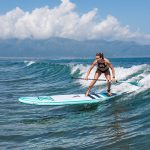 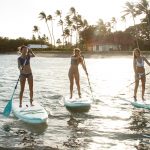 The Island Environment
It’s hard to imagine a climate more agreeable than Maui’s. Daytime high temperatures are around 25-30°, cooling to 15-20° at night. Sunshine is plentiful and the humidity is moderate. Maui experiences only two seasons, summer and winter. The warmest months are August and September and the coolest months are January and February. The driest months are from June to September and the rainiest months are December to February. These are averages and trends however; hot, dry days and cool, wet days will occur in every month. Despite a lack of strong seasonal variation, Maui is host to an extraordinary diversity of microclimates, from desert to rainforest. Temperature drops 1 degrees C for every 100m of altitude, an important factor to remember when traveling to the summit of Haleakalā, where at 3000m, snow can fall in the winter months.  Rainfall varies more with location than with season. It rains every day somewhere on Maui but most rain showers are isolated and of short duration and they are also the reason why you will see a lot of rainbows. Winter storms in the north Pacific create swells and large surf on Maui’s north shores.

Stand Up Paddling Nirvana
The options to stand up paddle on Maui are endless. There are so many places on this magnificent island where you can spend a quiet day on your board.The Maliko Run is the famous 12 mile down wind run from Maliko down the incredible North Shore coastline to Kanaha. The north east trade winds will determine whether this is an ‘assist’ or full whitecapping downwind experience for those with the right equipment and skill set. On lower wind days, the small pushing wavelets can be helpful for less seasoned paddlers to cover a greater distance with less effort.

Makena is a small community on the south west of the island and its wide, sandy beaches offer the perfect crucible for paddlers. Once in the water, you can just follow the line of the beach and marvel at the beautiful waters beneath your feet. It’s pretty much a guarantee that you’ll see a few honu (turtles) along the way. The shore break can be very rough though during a big south swell.

The Kapalua Bay is located on the northern western part of the island and is protected from large swells. Kapalua Bay has a beautiful large sandy beach and is surrounded by resorts making it another popular spot that is best visited early in the morning. 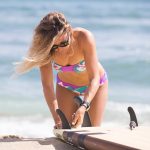 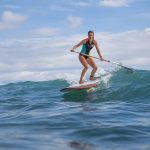 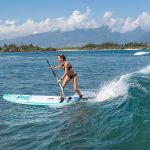 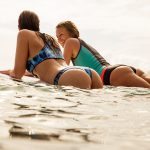 Kihei is one of the most popular places to paddle on the island of Maui. The gentle beach is a favorite among locals and tourists alike. It allows you to paddle around the Whale Sanctuary and if you are lucky, you can get close to the whales that can be found just offshore. Many humpbacks come here each winter to this wildlife sanctuary. The conditions at the “Cove” favour the beginner, as the waves are consistently small owing to the slopey sand sea bed.

I started to surf and to stand up paddle in waves around the north west side of Maui. Launuipoko is great for intermediates with a bit of experience in waves but it is recommended to wear reef boots. There are also several peaks back to the north/west back towards Lahaina that you can paddle to if Launuipoko gets crowded. 1000 Peaks is also good for small waves and is less crowded because it is more spread out.

Those who are looking for a bit bigger waves can go to the north shore reefs at Kanaha, while further east the lefts at Lanes are usually uncrowded. Next door Ho’okipa Beach Park is a big, open-ocean feeling wave and offers a humbling experience due to the potential size of the waves and crowds. Honolua Bay is the jewel in Maui’s surf crown. Sitting out on the wild northern tip, the drive out there is stunning. Be patient and tread lightly and you may be rewarded at this classic right hand point.

A Year Long Season
Good stand up paddling conditions can be found on Maui all year-round. In summer you will find some nice swells on the south shore and if your main focus is action in the waves on the North Shore then I recommend the winter season (in the northern hemisphere). The good thing on Maui is that you can explore and so something different every day. I also like to go for runs, there is good mountain biking and one of the most memorable adventures here is the hike to the Twin Falls. We had the whole pool for ourselves and it was so much fun to paddle under the waterfall and to just soak up the nature. 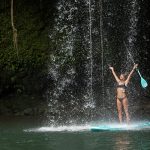 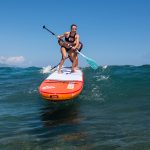 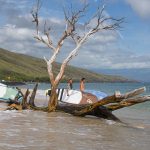 On The Ground
Trips to Maui seem to work best when you organize them a few months in advance, rather than at the drop of a hat. If you’re travelling with your family, you can find beautiful houses in different price ranges on local rental websites. If you’re travelling by yourself for a longer period (one month or longer) or you want to find a cheaper option, I recommend you to look for a studio or room in a shared house. Go to Craigslist.org or ask around on Facebook, many people rent out rooms but because Airbnb is not allowed on Maui it makes it harder to find them!

I also recommend not to book your car through the international rental companies at the airport. The local ones are much better, with cheaper prices and cars for people travelling with gear, such as www.northshoremauirentalcar.com or www.kimosrentacar.com.

You can find all kinds of good food on Maui. I like to wander around the surf town Paia and go for a coffee or smoothie and there are also good restaurants for lunch and dinner. Maui’s most known establishments in Paia are Charlie’s and Mama’s Fish House. I could probably write a book on all of the places and meals that I love in this town but I will keep it short. For sit down meals I like Flatbread Company, Paia Fish Market and Cafe Des Amis. Mana Foods has great take away options and is also a good super market in general. I also like to pick up a fresh salad, sandwich or poke bowl (fresh tuna) at Kuau store. SUP International