HOW TO…
HANDLE A MEGA SUP

Have you been on one of those massive multi-person SUPs yet? You should definitely check it out, and don’t leave it too long as they’re taking over. While they are about as stable as walking across your kitchen floor there are certainly a few hacks which will make your day better.

Carrying
Unlike every other sup board on the planet, if you’re unfortunate to have to carry a mega sup any sort of distance (i.e. further than 10 feet) on your own, you’re better off deflating it and carrying it like a rolled up carpet.

When there are two or more of you, it’s easiest to transport it on your shoulders to reduce the overall width of your party. You suddenly discover that all your usual routes to the beach are too narrow to stand alongside carrying it by the handles.

Pets n’ stuff
The first thing you’ll probably want to do when you get your new monster sup is to throw a party and invite your friends, mothers, dogs and so on to join you aboard your floating kingdom on a day with no surf.

Dogs love these huge boards and will be constantly jumping off, swimming around and trying to scramble back on deck – but the sides will be too high for them. Rather than hoisting them up by the collar or harness, put your hand against the back of their necks so that when they climb up they have something to brace against and don’t just push themselves away.

We’ll deal with how to handle your friends later on, but with retired mothers and other less paddle-savvy populations, just be aware that when they inevitably fall in, it could be as scary for them as falling overboard from a boat. Plenty of reassurance and a very rapid assist should keep things sweet, preceded of course with a quick explanation before launch that if they do fall in, letting go of the paddle is OK and that their buoyancy aid and wetty will keep them afloat.

“ For likely the most fun you can have on the water outside of standing up inside a perfect barrel, find a hardy crew of paddlers and take your Mega SUP into the surf ”

Power and steering
These huge boards are best powered from the front and steered from the back, so have your fittest and most capable paddlers up front and less able / new paddlers towards the tail. From their forward position, the powerful guys will be able to throw everything into it without slewing the board off course with every stroke. The guys at the back should either just paddle with forwards strokes, or stop paddling and apply rudder on their respective sides to maintain course or change direction as required. This paddle / rudder / paddle / rudder cycle will give them time to catch their breath.

Depending on whether you have four, six, or eight people on board, you’re going to have two, three or four rows of two people paddling side by side. The easiest way to coordinate is for the front paddlers to set the tempo and the rest to just focus on keeping in time with the paddler in front of them. 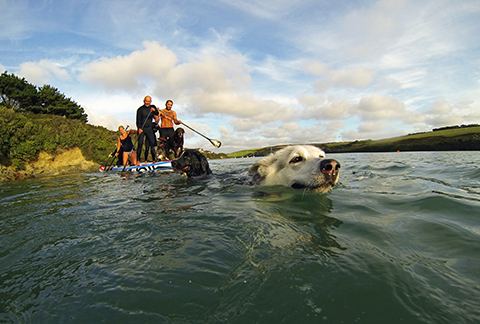 Surf
For likely the most fun you can have on the water outside of standing up inside a perfect barrel, find a hardy crew of paddlers and take your mega sup into the surf. The best waves to start on are those with not many others around, and about 1-2ft and crumbling.

It’s possible to surf with just two or three people, though four or five is better, and six is a bit of a sweet spot when things get bigger as the extra weight and power helps you barge out through racking lines of white water on the way out.

Coordination is everything so you need to be clear on who is the captain. The captain will have to decide and call out what waves to go for and whether to turn left or right to position for the wave.

Like all surf craft mega sups require an adjustment of trim when transitioning from paddling for a wave to taking off on a wave. The steepness of the waves you are in will dictate your formation, but it’s generally easier to keep the rearward steering paddlers back by the tail and then have the forward row or rows sit further up front to catch the wave, then quickly shift back towards the tail to prevent the nose stuffing in.

Wiping out
There’s a good chance that heads and paddles will collide in the tumult so helmets should be mandatory if you’re taking people into your care. Every spill will be different but some basic safety points include:

1. Do not hold on to the handles if the craft flips or you are no longer feel in control. A body twisting one way with the sup twisting the other and a limb trapped in between is a grizzly prospect.

2. Save yourself and jump well clear if you feel that it’s going to flip.

3. If you go under, beware of the sup being above you or coming towards you as you resurface. Protect your head as you come back up. SUP