If the newly crowned world champion sup racer gives you a tip off to visit a place, it’s probably worth more than a casual glance. Daniel Hasulyo has just taken the technical race title at the ISA event in China, and if you’re wondering what his training schedule runs like, it looks a bit like this…

Thailand is among the most amazing countries on the planet, wouldn’t you agree?  Being home of not only one of the biggest and most exciting metropolis’ of modern civilizations, Bangkok, but also one of the most diverse ecosystems of our planet, it’s a real cultural and natural treasure box waiting for you to just dive right in.

The past four years I’ve been working with Starboard at their headquarters in Bangkok. When we visit a place as a tourist, just passin’ thru, we only get to see a certain presentation. But when you work in another country it allows you to peek behind the curtain a bit. It’s given me the chance not only to be able to see in first person the incredible mechanisms of production behind this pioneering brand, but also to travel, discover and experience the real Thailand, of thousand islands, of untouched jungles, of hidden cultural secrets and undiscovered waterways.

Just four and a half hours outside of Bangkok lays an incredible archipelago comprising over 50 islands, with the main island being Koh Chang, or Elephant Island, second biggest island of Thailand after Phuket. The island is known for its waterfalls, thriving coral reefs and untouched rainforests. Koh Chang is a National Park, which preserves the island’s beauty and guards the wildlife both on water and land. 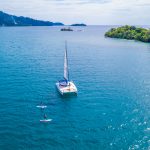 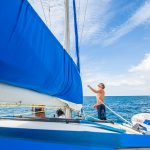 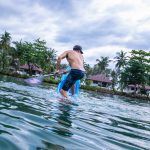 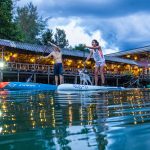 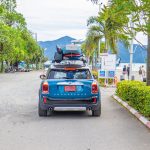 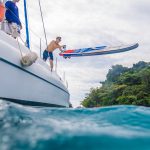 We had chosen Koh Chang as our location for the preparation of this year’s SUP 11 City Tour, and after the 3rd consecutive victory, in a row, we’ve reached the conclusion that this island must have been designed by nature to be discovered by SUP. And when SUP Station Thailand opened their second centre on Klong Prao beach it just leant support to this theory. We knew that we are in the right location.

My girlfriend Sai became manager of a new activity affiliated with SUP Station: the Koh Chang Sailing Yacht. It offers a full day charter on beautiful catamaran cruising around the archipelago augmenting your exclusive private adventure with snorkelling, SUP tours from the boat and soul-nourishing views of the National Park. There was no question that I wanted to try it out and experience the thrill of sharing such amazing moments with amazing people.

Coming back from California, we called photographer Georgia Schofield, asking if she was available for a shoot. She was, great! We gathered our friends from Bangkok and were on our way to leave the big city for a couple of days and get lost in paradise once again.

In the morning, we packed two inflatable boards (the Tikhine and Whopper Zen), my 14’ race board as I was at the time training for the ISA Wolrd Championship (in which Daniel has just won the technical race – Ed), a brand new Starboard Hyper Foil and wing sets, four paddles, Georgia’s complete camera gear (with drone and tripod), luggage for four people, our dog Maggie, P’Aom from WeSUP Thailand (possibly the best Female Thai paddler), Georgia, Sai and myself in our Mini Countryman. 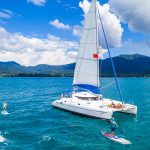 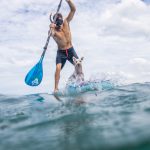 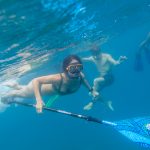 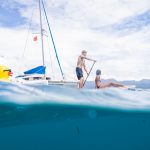 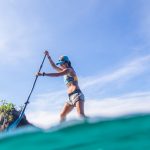 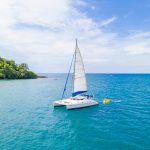 Surprised at how comfortably all the animals and equipment seemed to fit into the car, we had hit the road for two precious days of total freedom following the winds and our imagination, combining good times with good actives with our friends. Our crew was expanded further as Fah and her buddies had also made the drive down from Bangkok and once the team was assembled, we were ready to set the sail and head out to discover islands, fish, corals, mini reefbreaks and sparkling emotions. Being a National Park, Koh Chang is probably the cleanest island I have visited in Thailand by far. The Park’s maintenance might be connected to the presence of Trash Hero, but I also believe that the local communities truly play a part as they respect nature and have learned how to live in symbiosis with it. The corals in particular are incredible and they fringe every little island.

We made a rendezvous with Madame Cholet from SUP Station Koh Chang situated in the middle of the island. She knows the place intimately of course and helped ferment our decision to sail out to our first destination just 5km from us, a breath-taking little island holding its own little ecosystem. Once we’d readied the boards and grabbed our snorkelling gear, we were ready to get blown away by the amount and diversity of life we found under the surface! After the whole day on the water, we watched the sun go down and exhausted by happiness, we all collapsed ready to repeat again the day after. I can’t impress upon you enough how blessed I feel to have had the chance to share moments like this with my girlfriend and friends from all around the world. I also feel truly inspired by seeing these pristine locations. Experiences such as sailing and paddling in a National Park do lend more than a glimmer of hope for a better, greener and more conscious future for our planet.

« ON EUROPE’S AMAZON
CITY TO SEA »