It’s fair to say that the average surfer these days is more desensitised to the idea of heavy waves than the average surfer of twenty years ago. That’s not because people are necessarily surfing heavier waves; Philip Edwards first surfed 6ft Pipeline way over half a century ago in 1961. But because we’re seeing a lot more of it. It does make you wonder, could I do it? Could I sell the house and live in the tube? What does it take to make a wave at one of surfing’s ultimate proving grounds? The wave in these photos in particular has held fascination since it exploded into the pages of surf mags as ‘the beast with no back’; sucking up from below sea level to throw surreal submarine tubes. We spoke to Benoit Carpentier and Shakira Westdorp (fresh from taking the women’s sup surf world title in China) on the technicality and reality of making it out alive… 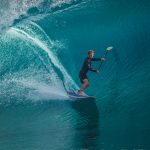 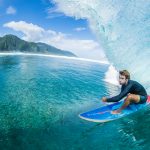 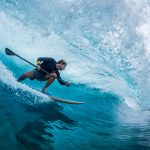 OK Benoit, please can you tell us all where this majestic bomb is? What’s it like getting there?
The one and only Teahupo’o!
Definitely one of the most intense lefts in the world. You can get the best wave of your life here, or one of the worst wipe outs…Teahupo’o is located at “the end of the road” of Tahiti Iti, Tahiti’s peninsula on the barrier reef. It’s an hour’s drive from Pape’ete airport and ten minutes of paddling when you get there.  During the main season there are a lot of surfers coming from all around the world to try to get the wave of their life. But once you are in the water the locals are super nice, there is always such a good vibe in the water.

Who was on the trip with you, and how long did you get to spend out there?
I got the chance to come to Tahiti for the Starboard photo shoot this year with a big crew: Zane, Connor, Shakira and many others.  I spent three weeks in Tahiti, ten days staying at Matahi Drollet’s house on the peninsula with the Starboard crew and then the rest of the trip in between Teahupo’o, Pape’ete and Moorea island just with one of my mates from France and the local boys we met.

Barrels always look ‘easier’ in a photo than in real life, but how heavy was this session?
Yes Teahupo’o is a gnarly wave, getting barrelled backside on a stand up is definitely not easy. Before this trip, that was something that I’ve never done so it was definitely a big challenge for me! We didn’t get any really big swell when we were there but just enough to get some dreamy visions and to leave some skin on the reef, haha! I don’t remember any big hold downs but some of us finished up on the dry reef and had to go all around the lagoon to get back out. This is the problem of the sup when you’re in the impact zone, there is no escape…

Ben Thouard is the photographer. What’s it like to work with him? Does he just shoot or do you work out a plan to make sure you get the best shots?
Ben is one of the best water photographers in the world and he knows Teahupo’o like no one else. He positions himself perfectly every time, so you’ve just gotta get the bomb and the job is done! It was great to meet Ben and learn some cool tips from him, after the photoshoot I went foiling a lot with Matahi and him.

Talk us through the board and paddle you are using. What makes this combo work in waves like this?
The cool part of a photo shoot is that you are able to test many different boards. For all the action at Teahupo’o I was surfing mostly the new Pro 7.3×25.5 with the Enduro paddle.
That combo actually worked so good, it was so nice to have some volume in my board and to be able to get super early on the waves to have time to slowly negotiate the drop, then set up the perfect line to get barrelled.  And being able to move fast to get out of some bad situations is nice as well.

Was this a special session for you? Or is it just another day in the life of an international team rider?!
Oh wow that session was special for me, we had a surf early in morning that day and it was really crowded and the wind came so we decided to go back to the house for some food. Then  it started to rain like crazy and right after that, Matahi came to get us to go back out cause the wind died.  And yep that was the good call, we got Teahupo’o with only a couple of guys out for an hour and that bomb came to me.  The best backside barrel of my life yet! 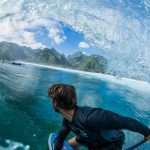 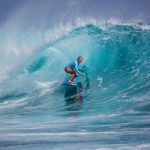 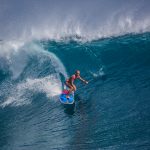 Over the years many of us have gotten used to mindsurfing this wave. But can you talk us through the reality of a wave at this place from take-off to kick out?
This was my first time at a wave like this. I was pretty excited but nervous also. Benoit said he was going to warm up on his short board first and I thought that was a good idea and did the same. I started with a couple of wipeouts but then got a dream barrel and was so frothing!
I was watching how Zane approached the wave and tried to do the same, as he is a goofy footer also. You have to commit early and paddle hard. The more speed you have paddling in, the easier it is to choose your line. Get your line sorted and go for it. The barrel here is so open so if you get the right line it’s a bit easier. Obviously bigger and deeper is very technical. In the barrel it’s just like all the pics you see of looking out of the barrel: the water colour, the mountains and the boats in the channel… it’s epic! Then you get spat out and it’s the best feeling and everyone in the channel is cheering and you’re so stoked you just got the best barrel of your life!
I actually didn’t know we were going to be surfing Teahupo’o until I arrived so I was so stoked. We got to get a few days out there when it was offering really fun conditions.
We surfed a couple of other breaks also and had an awesome day on the boat cruising around the back side of the island and seeing some amazing caves and waterfalls. Tahiti is so beautiful.

What fundamentals would you advise riders to keep in mind if they want to reliably find a barrel rather than fluking themselves into one?
The best way to get better at barrel riding is surfing waves that have reliable barrels, like Tahiti, Fiji, Indonesia, etc… It’s way easier than trying to get barrelled on your local beach break when in reality it might only throw one out every now and again. Surfing good waves improves your surfing so much and quickly too. You get more opportunities to go for it and get the feeling of where you should or shouldn’t be positioned on your board and on the wave. Also, you have to commit to it, paddle hard and aim for the exit. You’re going to eat a lot of shit but when you make one it’s all worth it.

Have you got some survival tips for when it doesn’t all go as planned in waves like these? Was there a certain ‘drill’ to follow if you got caught inside here?
It’s good to get a feel of your surroundings at first. At a place I’ve never been to before I like to chill in the channel for a couple of sets and see how it all works and watch how the locals surf it. Also knowing your abilities in different conditions is key.
If you fall, try to fall flat to avoid getting torn apart but the reef. But if you get pressed onto the reef it’s better than getting dragged along it. There is a shallow reef inside and then a lagoon on the other side that. If you take a wipeout, you can get washed over the reef into the lagoon. From there, depending on the size you can wait out the sets and charge across the reef or take the longer, safer option by paddling along the lagoon and back out the channel.

Please talk us through the board and paddle you were using out there, and why it works so well.
The board was the 2019 Pro, 7’0 x 24. Starboard are quite advanced in the R and D side of things and a lot of work goes into producing quality products. They are also at the forefront of using sustainable materials and eco-friendly constructions. They are very environmentally focused and the performance of the boards have been getting better and better with each year’s new designs and construction. The boards are tested in a variety of conditions and have input from our top riders. The boards copped a beating in Tahiti but the construction is so good that there was hardly a scratch on them after a week’s shoot.
SUP INTERNATIONAL 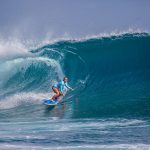 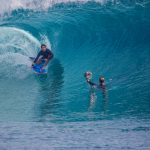 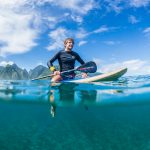