Double world record holder paddles from Albany to Statue of Liberty in eight-­‐day endurance challenge, calling for companies to take responsibility for plastic they produce. Environmental  activist  Lizzie  Carr  has  become  the  first  person  to  successfully  paddleboard  the  navigable length of New York’s Hudson River -­‐ a 275km journey from Albany in from New York State to the Statue of Liberty. Lizzie, who paddled for up to nine hours a day for eight consecutive days, confronted unpredictable conditions  throughout  her  journey.  The  incoming  Hurricane  Florence  brought  gusts  of  wind  up  to  30mph  with  large  swells  along  the  East  Coast.  This,  coupled  with  intermittent  thunderstorms, torrential downpours, strong currents and commercial shipping traffic on a river that spans 3.5 miles at its widest point, makes this feat of endurance all the more impressive. 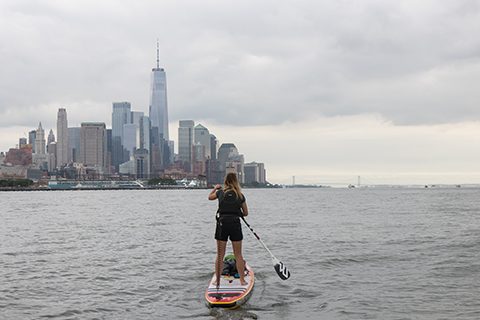 Lizzie,  a  passionate  environmental  advocate  who  founded  the  Plastic  Patrol  initiative  in  the  UK  following a cancer diagnosis that prompted her to take up paddle boarding to recover, took on this challenge to bring attention to the issue of plastic pollution, ocean health and, more broadly, climate change. En route Lizzie conducted a series of citizen science activities to develop a better understanding of water quality on the Hudson River. She collected water samples for micro plastic analysis and hosted a series of beach cleans for local communities that were attended by more than 100 volunteers and supported by REN Clean Skincare.  Lizzie says, “Paddle boarding the Hudson River was an incredible way to explore and experience New York  but  it  didn’t  come  without  its  challenges.  It  was  physically  demanding  and  mentally  draining  with  each  day  throwing  up  new  obstacles  to  navigate.  This  journey  wasn’t  just  about  the  thrill  of adventure and because there was a much bigger purpose at play I was even more determined to see it through.”

The USA is one of the world’s largest consumers of single use plastic and it’s estimated that 90,000 pieces of micro plastic per square kilometer were found floating in the Hudson River in 2017.   Lizzie  and  the  beach  clean  volunteers  collectively  photographed  and  plotted  more  than  2000  examples  of  plastic  encountered  along  the  Hudson  River,  pulling  into  an  interactive  map  she developed  (www.plasticpatrol.co.uk/map).  The  map  currently  houses  more  than  50,000  crowd  sourced examples of plastic logged across 18 countries globally. Lizzie continues: “I am thrilled to have brought Plastic Patrol to the USA and start gathering really interesting and important data on the types of plastic we are finding, where it is situated and which brands are most prolific offenders.” 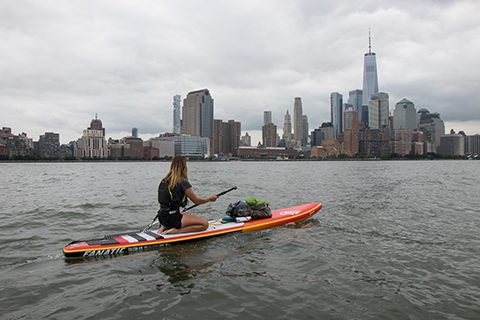 “Gathering and plotting photographic evidence is a really powerful way of building evidence against the brands and manufacturers responsible for creating it and what better place to end this challenge than in the heart of New York City where a lot of these companies are based.”  Lizzie is working in partnership with Riverkeeper and Hudson River Park to compare and analyse data collected.  Carrie  Roble,  Director  of  Science  and  Stewardship  at  the  Hudson River  Park  Estuary  Lab  said: “The Hudson River is one of the largest estuaries in the United States, making it a significant place for Lizzie to highlight how micro plastics are impacting the world’s waterways,”.

Carrie  continues,  “The  Hudson  River  Park  Estuary  Lab  began  researching  the  concentration  of  plastics two years ago and is finding far too many of these tiny plastics in the Park’s waters. With Lizzie’s help, we’re able to examine other parts of the river, better assess the scale of the problem and start developing solutions supported by science. The Hudson River estuary is as unique as it is valuable, and the health of its ecosystem deserves our commitment to reducing pollution in these waters.” 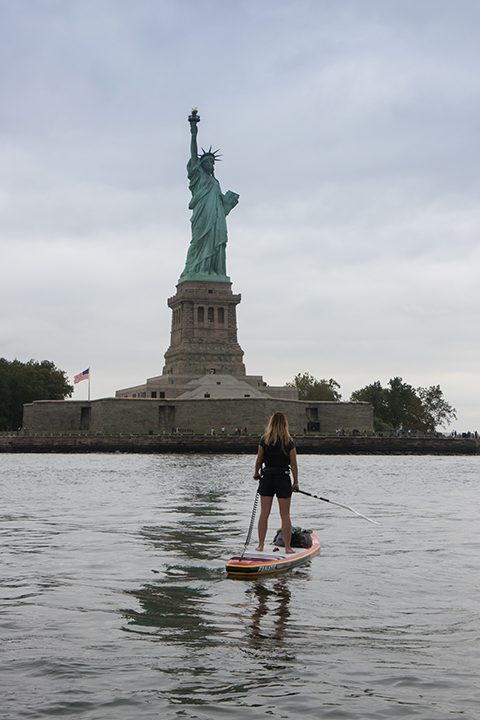 Lizzie  concludes:  “By  tackling  the  problem  at  from  the  root  –  inland  where  80  per  cent  of  marine  debris starts – we can really make a difference. I was overwhelmed by the positivity and support I received  from  locals  on  my  way.  I  was  joined  on  the  water  by  people  who  had  been  tracking  my  journey online and others stopped on the shoreline who cheered me on. It was incredibly motivating and really illustrates how much people care about the issue.”