The Starboard Longboard is nose to tail gorgeous. Light, tough and superbly finished. Where it really thrills is in the performance: it surfs powerfully off the tail with a fine balance of speed and manoeuvrability giving you a great feeling of connection with the wave face. Many people consider longer sups to make more sense in the surf and the Longboard is a perfect example of why. This board goes where you want to put it, it’s a true surfer’s board.

The Starboard Longboard presents as an unambiguous performance longboard. There is a little less width in the nose than you would find in a nose-rider-log design and a touch more sweep into the rounded diamond tail. Underneath a double concave begins at the nose and runs toward the fins before finishing in a vee. The rails are hard toward the 2 plus 1 fin set up and the side fins are set close to the rails. On deck, one of the most comfortable carry handles you’ll ever meet sits in the middle of the smart diamond grip deck pad. The tail is covered with a smart tail pad with pronounced kick and the front third of the board is in the Startouch finish – so no wax needed for journeys to the nose. The 9’0″ x 26″ is designed for high skilled and lighter riders up to 75kg, while the 10’0″ x 31″ we tested gives more float and volume for heavier riders up to 110kg.

A high-performance longboard that is versatile, incredibly responsive and smooth to turn. This paddle board is inspired by our legendary Starboard Surf Longboard model, designed to perform in waves from 1ft small beach breaks to head high reef breaks. The boards offer fast down-the-line surfing, as well as the ability to perform in the critical section of the wave. These cutting-edge shapes are totally well received by our team riders and anyone who have tested them.

The Starboard Longboard looks like it wants to go well, and it’s no surprise that it has the performance to match. The Longboard has an early roll in to the wave which gives you plenty of time to set up your attack. This is a long, wide board but excess volume has been spared and it sits very well in the wave face when you need to trim through close-out sections and it is capable of reaching high speeds quickly. However, that rounded diamond tail is the perfect fulcrum for a deep gouge or cutback and the board never wants to run away from you.
In peakier surf you get a controlled, swooping drop-in followed by a big bottom turn which carries all your speed into your next manoeuvre – and this big board will smack the lip with authority. Nose-riding is academic on a SUP if you do your part so all good there; but the real joy of the Starboard Longboard is its roundhouse on-a-rail performance. It is impressive.

Fins: US centre plus 2 FCS 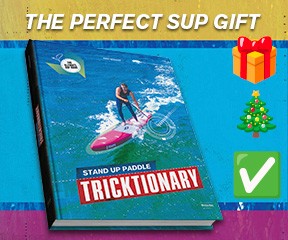