Log In
November 19, 2021
by Harry
Category
Tags: Liam Dunkerbeck, starboard
Tweet
LIAM DUNKERBECK: WING FOILING SPEED RECORD LUDERITZ
Starboard say: “Liam Dunkerbeck sets what we believe is a new speed record in Wingboarding.”
Liam achieved a top speed of 31 knots according to his GPS data and set an average speed of 26.92 knots over a 500-meter distance according to the official speeds measured by the Luderitz Speed Challenge team which system is approved by the WSSRC.
For anyone thinking of attempting to break this record, here is what Liam has to say:
“This is a new sport and it’s growing really fast. Go for it because maybe one day a new discipline will exist that is wing speed” 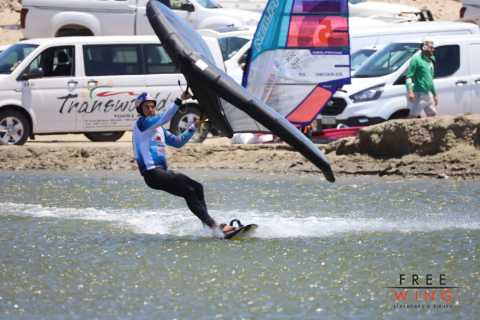 Luderitz, Namibia (South Africa)
The Luderitz Speed Challenge is arguably the ultimate competition for World Speed Sailing Record attempts  with its strong and predictable wind in combination with a precisely engineered canal built at an angle offset from the wind that is designed exclusively for maximum speed.
Liam Dunkerbeck, a talented new generation waterman and son of Björn Dunkerbeck, started riding waves by the age of three and has already set his mark in the windsurfing and wingboarding competition scene.
Together with the team from Freewing, Starboard and Airush they set out to explore the barriers of wing top speeds and give the design team some insight into the requirements of the equipment in these extreme conditions.
The wing was a prototype Freewing Rocket, which uses a new generation of canopy and leading edge materials to enhance the stability of the canopy and allow the Wing to run a narrower leading edge for reduced drag, as well as much higher pressure for increased stiffness. Designed by Mark Pattison, Svein Rasmussen and John Lewis these are the first generation of the Freewing Race wings.
Due to the depth of the Canal and the lessons learnt from windsurfing and kiteboarding, the boards designed  were non foiling directional boards, with a tri fin configuration to aid the stability.  According to designer Clinton Filen “ The concepts were taken as a combination of windsurf speed boards, kite slalom board and big wave tow boards. These are very much our first attempt to see how the boards would start to feel at over 30 Knots, which is not particularly fast in terms of Kite and Windsurf Speeds but it’s an absolute first step. At this stage hydrofoils still have their challenges at very high speeds. So we chose the directional boards with fins as an alternate approach” 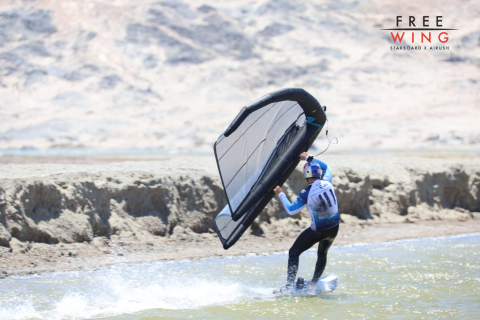 Here is what Svein Rasmussen has had to say about the record attempt:
“This has been a really fun project, we have been doing a huge amount of development on wings and we figured it would be fun to throw Liam out there and see what he could squeeze out of the latest versions. We have a legacy of wanting to go fast, and the first steps with the Rocket will give us a good insight into future design”
Liam Dunkerbeck
“It was my first time in Namibia. I have been to some parts of Africa like Morocco to train in surfing or to Dakhla – to see my father, Bjorn, compete in windsurfing races. What I liked most about Namibia is that it is a very calm place when you are out of the water but for sailing it is incredibly cool because it works like clockwork – almost every day the same wind with the same speed enters the channel at the peak time. I really enjoyed how fast you can go with almost no effort – basically as if the gear is doing it for you. The equipment I used for the speed test worked very well as it gave me the maximum achievable speed. I am now even more motivated to continue training for the next competitions and develop new skills in wingfoil. Hopefully next year we will be able to make more records!”