In the searing early summer continental heatwave, Tuetonic power couple Paulina Herpel and Valentin Illichmann resolved to cross Germany from Dresden in the south east to Hamburg in the north west. Their modus operandi would combine the traction of the locomotive engine with the propulsion of the paddle. 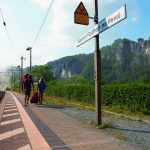 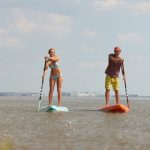 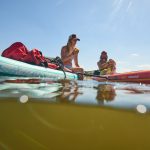 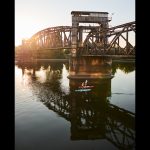 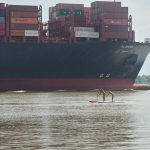 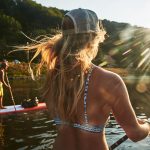 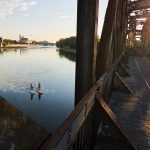 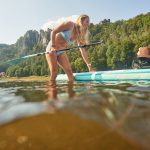 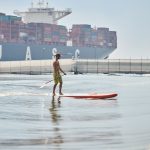 Valentin: Our plan was to journey from Dresden to Hamburg with our inflatable boards always with us, be that floating us down the Elbe or carried in our rucksacks when we would hop on the train to get between destinations. The great thing about this trip was that we never had to double back to return to a parked car, instead the glide would continue in perpetuity. We had never done that before.

Paulina: Our start was a bit spontaneous, we chose an area a few km upstream of Dresden, in the spa village of Rathen.  We decided on Rathen because the drive in took us through the Elbe Sandstone mountains and the incredible geo-formations within. We didn’t get paddling straight away, jumping into the water to cool off after pumping the boards up seemed like a better idea. That was glorious!

Valentin: When we took that first paddle stroke, it felt like the adventure had at last begun. We had come from Berlin, and the contrast to the city was huge. How quickly that we were immersing into the natural world. No more people around us, only huge faces of sandstone rock towering above us as we paddled. Madness! We paddled about ten kilometers in the rising heat, in between diving into the cool river over and over.

Pauline: When the sun went down in the evening behind the deciduous forests, we stopped at a beer garden in Obervogelgesang to toast the end to a beautiful day. However, we still had to take the train to Dresden, because we wanted to experience the sunrise on the Elbe there the next morning.

Valentin: Once we were on the train (and as it would turn out, throughout the whole trip) we were quizzed by our fellow travellers who wanted to know what we were carrying in our rucksacks. Most of them could hardly believe that along with our usual luggage we were carrying two SUP boards with paddles and pumps, they were packaged so discreetly

Paulina: But I have to admit that I was happy about the wheels on my bag. I could have only briefly worn the 15 kilos on my back.

Valentin: We got up at 4 o’clock – very early, but we were full of excitement for the day ahead.

Paulina: Still a bit subdued from sleep, we wheeled our packs through the early morning streets of Dresden. Because it was the weekend, we met plenty of people coming to the end of their day after a big night out.

Valentin: As we walked across a bridge, we saw the black water begin to sparkle beneath the magnificent buildings with the angels on the rooftops. It was a really unique moment.

Paulina: On the bank, we quickly pumped up the boards, hid the luggage behind a bush and went straight into the water in front of the old town of Dresden. This is fairly common practise for paddling on a short trip, stashing your kit somewhere so that you do not have to have everything strapped to your board.

Valentin: Many of Dresden’s buildings are made of the ochre-yellow sandstone mined from upstream in the Elbe Sandstone mountains, and the city scenery suddenly began to shine golden in the morning sun. We were all alone. No shipping traffic, no street sounds, wonderful! A dawn sightseeing tour from the water reveals a city from a completely different perspective. After about two hours we were back down the river at our launch spot to continue by train to Lutherstadt Wittenberg.

Paulina: Wittenberg didn’t really deliver the urban experience that Dresden did, shielded as it was by the nature in the foreground. We passed through fields, meadows and small bathing beaches. Because it was so hot, we dived in often for a swim.

Valentin: But never without first checking to see if a boast was coming! And we had to hold on to our boards as we let ourselves drift with the current. In flowing waters you should pay attention to these two special factors. We didn’t use an ankle leash, you should never wear one on a river because it can snag on a feature when you fall into the water and you effectively get pulled under. It’s better to have a waist-belt release, made for river SUP as they are easier to release.

Paulina: We later boarded the S-Bahn in Wittenberg’s Old Town and drove to the main train station to get to Magdeburg from there. In the morning we wanted to go back early and do another city tour at sunrise.

Paulina: My first thoughts of the day was that I was knackered! I don’t like getting up early but we also wanted to see the city there in the morning light so the sacrifice was all mine.

Valentin: As we did in Dresden, we went into Magdeburg’s old town to get to the water. And again we met happy party people who were still rolling from a hot night in the city. They sat next to us while we pumped up our boards, drinking beer and wishing us good luck.

Paulina: Passing beneath a railway bridge we were beset by marine life – fish jumping and even a beaver that accompanied us for a while. At first we were not sure what it was, but then recognized it by the tail.

Valentin: Because we wanted to see the Elbe marsh landscape in the Wendland, we jumped on the train to Boizenburg instead of paddling.

Paulina: It took us about two hours to travel the river from Boizenburg to Lauenburg, at a leisurely stroke. It’s a beautiful part of the Elbe, lined by trees, sand banks and jetties. People sitting at picnics on the beaches waved to us. The section was relatively quiet, only one ship came by which caused us to temporarily hug the bank. By the way, you should always research shipping lanes and traffic areas before you paddle, as well as dams and power plants. If they turn up unexpectedly, it can cause the unwelcome type of excitement on the water.

When we travel together, we usually ride next to each other, because it’s more social. Our tours are not about who arrives first. But if we are on more dangerous rivers, for example, rapids in Valentine’s home Bavaria, then he usually paddles ahead.

Valentin: It’s a tranquil stretch between Boizenburg and Lauenburg, and the river there would be ideal for beginners who are still finding their balance. We don’t hang around in Lauenburg and are soon on the train to Hamburg. We were headed to stay with Paulina’s parents who have a place in the Blankenese district.

Paulina: Completely typical, for days the high pressure prevailed and there was not a drop falling from the sky. And then on arrival in Hamburg, it starts to rain. You can’t help but feel sorry for the place, but somehow the weather is always like this when we’re there.

Paulina: Still, it was spectacular to paddle past the giant tankers. And it didn’t rain all the time! But of course I have to emphasize that as a Hamburg girl.

Valentin: At the beach we spoke to a woman who had been watching us on the water. She was asking how you get back on the board when you fall in, as would presumably happen quite often on a river or sea. We explained that you’re best not trying to heave yourself on by reaching for the opposite side of the board, as this can flip it easily slapping you back into the water. Better to push the board under you and wriggle back on.

Paulina: The waves that cause the tankers can be harsh. Of course, ships always have priority, they cannot stop or change course if they wanted to and we are the smallest link in the chain. Like pedestrians, it’s on us to pay attention to our surroundings.

Valentin: We saw two, maybe three big freighters in Hamburg, otherwise it was pretty quiet so we put the exclamation point on our trip with a three-hour tour along the Falkensteiner shore.

Paulina: And after the heat and pace of the past few days, it was really good to just sit on the board for a while and let the rain wash over you. SUP International