It’s the end of September, and my working season is over and after few winters spent in the Canary Islands, I decided to take a trip to Indo.

It’s the end of september, and my working season is over and after few winters spent in the Canary Islands, I decided to take a trip to Bali.

I had no fixed plan about how long I’d stay on the island, but subconciously was most likely thinking I’d stay at least until I’d been able to surf those world class points when they were properly doing their thing.

Everyone knows what the transfer from Europe to Indonesia feels like – despite taking mere hours to get to the southern hemisphere, it’s still long enough to almost make you forget why you’re going all that way.

When I stepped out of the airport at Denpasar and into the late Bali winter I was struck by how different things felt compared to my last trip here, two years ago in February. Right now, the dry season was still dominating and the deep greens I remembered were replaced with scorched dry beiges. I’d soon find out too that the water was a fresh 22 degrees, down 8 degrees from the 30 degrees I was used to…

Dry season of course also meant that Uluwatu was still pumping! After a six month layup I was feeling a bit rusty, and after a few schoolings was starting to feel like a victim of a brutal KO in the octagon rather than a participant on a surf trip. Fortunatley, Bali is blessed with almost as many massage centres as it has temples so treatment for recovery was available, fast, and cheap.

I soon settled into a steady routine. Wake up around 6am, breakfast, then surf check. After the first surf I’d have lunch at the warung then hang around till the sundowner session. Once back on land shower, and then dinner with friends, usually at an Italian restaurant.

With a modest budget of around 800 euros a month to cover accommo, scooter hire, Italian food etc… I decided to kill the winter by surfing through the wet season too. It probably worked out cheaper than having the heating on at home. 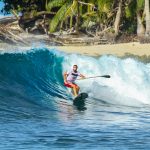 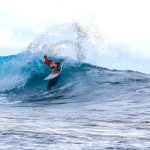 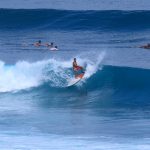 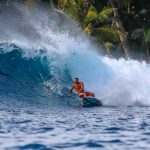 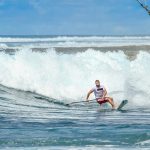 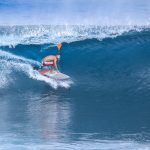 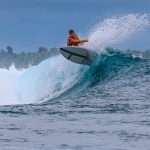 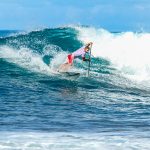 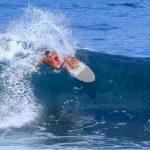 As the weeks pass I feel the surf-rust being buffed away and my skills are getting smooth. The days are getting longer, the dry season is still pumping and I’m getting some great sessions in on the west coast. A lull of a few days gives me the chance to replenish when a swell with the right direction and power swings into the lefthand reef at Balangan.

My friends and I scootered over to have a look and saw that it was perfect. The infamously long Balangan lefts were marching in offering a high-speed wall ride before turning insid out into a decent, but dangerous barrel on the inside.

I took one barrel which I think must be one of the best barrels I’ve ever had in my life, but unfortunatly it was a really low tide and unable to find my way out of the doggy door, got pile-driven back first into the reef at a spot charmingly known as the meat grinder. With my back shredded like a pulled-pork burrito I won’t surf for a whole week, but that barrel will live with me forever.

By the time my back had sealed itself, the the wet season was at our door meaning it was time to move from the west coast to east coast where the wind would be offshore and we would be able to surf ourselves silly at the multi-tiered rights of Nusa Dua.

The wet season means also that the south of Bali will be working almost every day and my favorite spot, Pandawa, is on fire!

Pandawa is an easy left and a long wave but depending on the tide and the swell it can also be heavy and dangerous, with a lot of current…

The time is running away from us month by month and my surf skills are as sharp as they’re going to get, so it’s time to try some new waves.  With some friends, I decide to visit Lombok and Sumbawa . Two boards, one camera and a handful of t-shirts and boardshorts is all the material we need.

We choose to visit the bay of Are Gulig close to Kuta Lombok. It holds an amazing long right that runs close to the beach, but the current in the channel to paddle in and out is horrendous. Fortunatly overthere there is a boat taxi which for around 3 euros will ferry you to and fro.

After a week at Are Gulig we pack up and head onwards to Sumbawa. The swell is inconsistent but fortunatly there are two spots which turn out to be real swell magnets: YoYo’s and Tropical. The first one is a fast and heavy wave with a long wall and some barrel sections, while Tropical is a really easy, long wave where even the beginner can have a lot of fun.

After a week in Sumbawa we feel its time to return to Bali and freshen up, and to get ready for the next leg which will be a dream come true for me as our destination is the Mentawais.

Despite being in the same county, the passage to the Mentawais islands is one of the longest I’ve endured in my life. Two flights from Bali to arrive at Padang in Sumatra, overnight in a hostel, and then a seven hour ferry that leaves at the crack of dawn. The journey finally terminates at the Beng Beng surf camp, owned by a big crazy Italian guy called Massimo. After falling in love with the waves on his first trip here, Massimo decided to build a surf camp as a way to stay in the islands.

Life here is amazing. No crowds, no traffic, no cars, no anthropogenic noisis, just a boat for the surf camp guests which takes you to the spot of your choice, while the surf camp photographer captures your every wave.

I had the opportunuty to surf some of the best waves in the planet as Hideway, Bengbeng, Ebay and Burger world were all on. Surf dominated the schedule as you’d expect, and the routine was mechanical: breakfast at 6am, spot check by boat, surf, lunch, surf, dinner while reviewing the day’s photos.

Of course we can’t stay in the Mentawais forever but the return to Bali is hardly brutal. April is nearly upon us and I’ve almost gone full circle as once again the dry season is ushering in the first of many quality days on the west coast of the Bukit Peninsula. Just a week before I had to fly back to Italy I scored once of the best days of my ‘winter’ in overhead surf at Padang Padang with only five others out. It’s only during the switch over between the wet and dry seasons that you’ll find Padang Padang so quiet, when everyone else is still hanging around on the east coast.

Back in Italy I’m in the middle of the main season, working hard and saving and reminding myself that a night out at home is the equivalent to living for a week in Bali. It’s helping focus my mind for the return mission this October. Maybe see you out there.