Red Paddle have teamed up with Northern Bloc to set up the world’s first Paddle board Ice Cream Parlour: here is what they have to say: 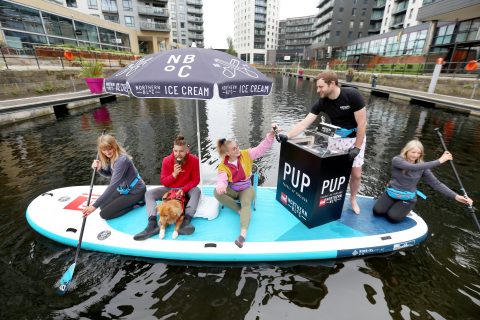 Celebrating the start of National Ice Cream Month (1 July) the brand has teamed up with Red Paddle Co to seek the most carbon-friendly way to share its vegan ice creams whilst the sun shines.

Trialling the PUP (Paddle Up Parlour) on its home surf, Northern Bloc is planning a schedule of pop-up paddleboard ice cream parlours as the UK basks in a staycation summer and the popularity of paddleboarding hits new heights.

The customised 17ft long XL Ride inflatable paddleboard ice cream parlour will take to the high seas in Bournemouth this month (25 July) for the UK’s only Dog SUP Surfing Championships on Branksome Dene Chine beach. The internationally recognised event brings together lovers of dogs and the sea for a fun-packed day of surfing and paddleboarding competitions, as well as live music, food and drink.

Red Paddle Co’s customised XL Ride inflatable paddleboard has been specially adapted to feature Northern Bloc’s floating ice cream parlour, complete with waterproof cooler bags keeping the range of vegan ice creams frozen and ready to be served up free of charge to passing paddleboard trade in need of refreshment. Designed specifically as a party paddleboard, it is Red’s largest board, capable of carrying eight riders plus kit and is perfect for friends and families who want to make memories as well as waves.

Stand-up paddleboarding or ‘SUP’, which involves standing on a floating board on the water using a paddle, was dubbed the sport of 2020 and continues to grow in popularity. Board stockists and brands such as South Devon-based Red Paddle Co, report that more British people than ever have been buying SUPs since lock down began last year. 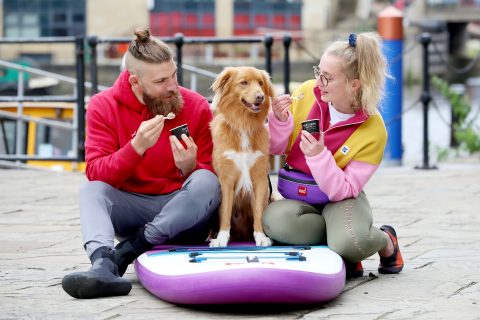 Whilst paddleboarding has been around for some time, the recent boom has been driven by the accessibility of the sport and the fact that it’s the perfect socially distant activity. According to the Watersports Participation Survey, together with surfboarding and bodyboarding, it recorded the highest increase in participation of all water sports, rising from 502,000 in 2008 to almost 1.4 million in 2018.

Commenting on Northern Block’s SUP ice cream parlour, Jamie of East Ardsely near Leeds said: “This is such a cool idea as it captures the feel of the summer and beach life perfectly and is so much fun too! As a keen paddleboarder, it’s great to be able to try out different areas and experience new things, so it was definitely worth paddling out to the paddleboard parlour for a taste of such sensational ice cream. Uptake of the sport would be even greater than it is already if there was free Northern Bloc ice cream at the end of every paddle!”

Co-founder and director at Northern Bloc, Josh Lee, commented: “To kick off National Ice Cream Month, we decided to take a totally different approach to sampling by creating something that’s totally environmentally friendly and linked to our ethical approach to making 100% plant-based premium quality ice cream. It was great to see local paddleboard enthusiasts putting the parlour to the test and jumping on board to satisfy their craving for delicious, natural ice cream.” 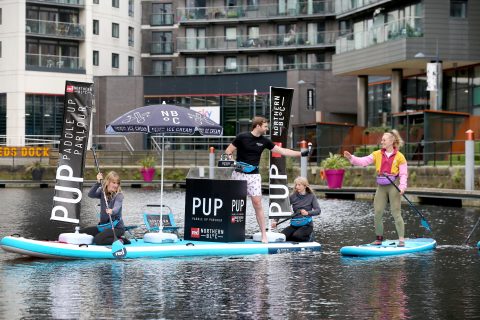 Charlie Green of Red Paddle Co added: “We’ve had the craziest past 12 months with demand for our boards going through the roof globally as more and more people discover the sport, but this is the icing on the cake. Turning our biggest paddleboard into a floating ice cream parlour doesn’t happen every day and judging by the astonishing reaction it’s received today; it will certainly be making waves throughout the rest of its summer tour.”

At Northern Bloc we set out to create a great tasting natural ice cream. We’re ice cream pioneers challenging the norm and changing the game to make ice cream much more than just a summer treat. Based in our inner-city HQ in the North, we don’t compromise and believe that you shouldn’t have to either – whether that’s on flavour, ingredients, values, ethics, or anything else.

We’re straight talking and always stay true to the principle of using only the best natural ingredients.  Ice cream is both a technical science and an art. Our 4th generation ice cream scientist (and world champion no less) continues to innovate in the pursuit of perfection.

Our unique, bold flavoured ice creams are ground-breaking. Just have a scoop of our 100% plant-based ice cream and you’ll see.  This is Ice Cream. Done Different!”