As dawn sets in, I slip out of my dream world, crawl out of the tent, put my feet on the sandy ground, breathe in the fresh sea air and watch the breaking waves.

A light offshore wind lets the surf break gently but surely into the silver morning water. The desire to jump into this splendour with my SUP surfboard rises up in me as if a magic elastic band is pulling me in. Back out on the water, where my longing and passion can come to rest.

There I stood on this beautiful beach in northern Spain. The waves broke in mechanical perfection on the sandbank. Not a soul around, just me and the ocean. But I knew all this glory would fade; not from my memory, but here and now, on this beach. 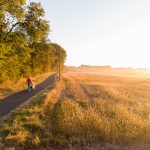 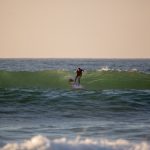 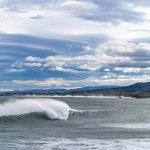 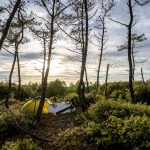 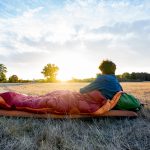 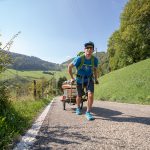 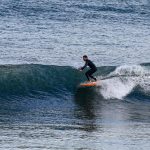 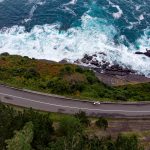 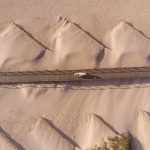 How far would you go for the perfect wave? With this in mind, I started a micro-expedition in the middle of September. An adventure that wouldn’t lead me into unknown worlds, but across my home continent to the westernmost point of mainland Europe. Not by car or plane, but on foot and with a skateboard, I went in search of the perfect wave. I packed enough equipment to support me for three to five months on a cargo trailer. A load which I cursed after only a few kilometers. But I also went in search of a bit of freedom, which I found with almost 4,000 kilometers behind me.

Antoine de Saint-Exupéry once wrote, “If you want to build a ship, do not drum down men to get wood, assign tasks, and divide up work, but teach them to long for the vast, endless sea.” With this yearning for the wide, endless sea, I am constantly drawn out into the world. My ship has neither a sail nor a rudder and I can’t cross the ocean with it. It is a mere piece of plastic and yet I feel the freedom and adventure all the same.

On my adventure to the westernmost mainland point of Europe the roads were my “rivers” to the sea. The roads showed me the direction, but every day I could decide for myself where to pitch my tent, when to rest or when to continue my journey. The pure freedom – or not? Theoretically, I was completely free in my actions, but in reality I needed weeks, if not months, to find freedom on my micro-expedition. The habits and constraints of everyday life cannot be easily shaken off. Lingering on a beach is not so easy when there are thousands of miles to go.

So there I stood on this beautiful beach in northern Spain. Perfect waves were waiting to be surfed. It was all as it should be and yet, at that moment, I knew it was an illusion to believe that I would be surfing the perfect wave on my 4,000 kilometer journey to Cabo da Roca. My legs were far too tired and balance and coordination were in the gutter.
After 50-100 kilometers by foot and skateboard, any attempt to elegantly surf the waves was doomed to failure in the first place. While I was initially content along the French coast not constantly falling from the SUP board, three weeks later, when I entered northern Spain, I had to be careful that the extra surfing did not stop my micro-expedition. My legs were completely exhausted. Every wave could have been the last wave of this journey, I couldn’t go on like this. I had to reset my focus and so I said to myself: it’s not about the surf. The longing to move forward and to go my way moved to the center, surfing became a side issue. When a storm broke out in Portugal and there were no sheltered bays for surfing, I ended up with just one job: running. Everyday life in its most monotonous form. Getting up, walking, sleeping…a monotony that could cause distress in its own way, but became a source of joy and fulfilment. Even though I followed apparently identical roads, I still went my own way and left a trail – maybe no footprint on the land, but certainly a trail in my own thinking and acting. In Portugal I was no longer headed westward, but further south. The temperature got warmer, the weather better, but the storms stayed. Even in sheltered bays the waves thundered with immense force to the beach and not for the first time I reminded myself of the surfer’s favourite refrain: “You should have been here yesterday.”

It’s easy to say, but on my self-propelled tour I could not easily switch between surfing spots like I could in a car. Like a ship on the wind I was driven by my longing and so there was only one place where I could surf: where I was at the moment.

After three months, I finally stood at Cabo da Roca. My body had reached the finish line, but my mind had long since made the next trip. There are still so many ideas and projects that I want to complete. All the experiences on this micro-expedition have shown me that I am capable of much larger adventures – or in other words: “Life is an adventure. Live, feel, love, laugh, cry, win, lose, stumble, but keep rising and moving on.” 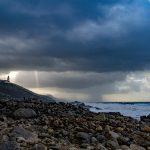 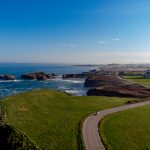 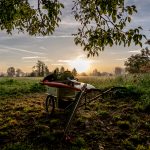 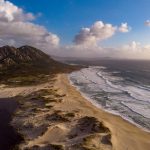 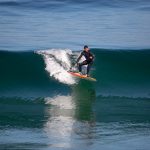 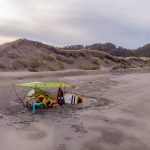 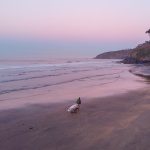 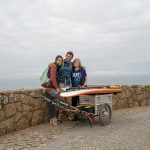 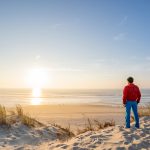 About Thomas…
By: Dom Moore, Editor

Aside from the genius idea behind this journey, what struck us most about Thomas’s epic was that he managed to sum up a journey of several months in just a thousand words, and as many photos (selecting just a few was not easy – they were all consistently stunning).

You may remember reading some of Thomas’s other adventures in this mag, and we thought it time that a little light was shone on his unique philosophy. Always in search of new challenges in sports and everyday life, Thomas finds novel ways to keep pushing his limits that make you think, ‘why didn’t I think of that?’.

On this micro-expedition, he deliberately sought adventure not far from any civilization, but rather in the middle of it. His journey involved many aspects of a real expedition but took place in an everyday environment. Real adventures that open the eyes to the forgotten beauties of everyday life.

As Thomas describes this unique approach to adventure: “I try not to go down the paths that I know already, or that seem easily possible. A journey, a dream or an adventure should never lose its uncertainty and always keep the chance for you to do something seemingly impossible. This striving to break new ground, broaden horizons and never rest, has something perfect for me. This is me. This is life.” SUP International

« FLOW MOTION
BACK TO DAKHLA » 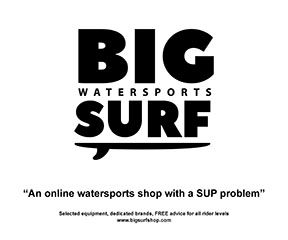