THE ISLES OF SCILLY

7 miles from shore with the end at last feeling possible, I found myself in a spontaneous, unspoken race with Alan Stokes and Ben Skinner. Both career professional surfers, both still in their prime, and both still with a competitive fire that the previous 25 miles had apparently not quelched. They were both quick! I will remember this as the most painful hour I’ve spent on a paddleboard, including the time I broke ribs on the Isle of Harris. 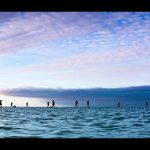 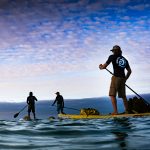 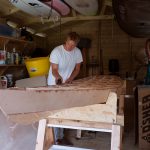 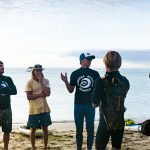 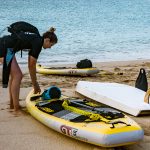 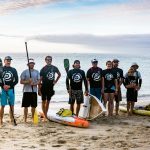 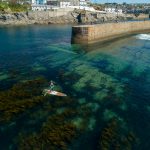 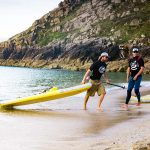 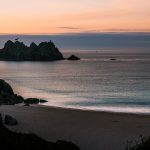 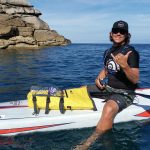 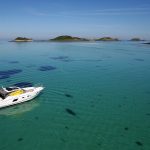 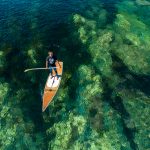 What was I doing out here in the middle of the Celtic Sea, paddling hour after hour in slapping chop, dragging tides and 12 knots of wind on the front right quarter? Well, I took a day off of work for this, and I would have given a lot more besides to be a part of the team. We were part of a broader cabal of eleven comprised of surfers and Hex-cel packaging creators Will and Sam Boex, photographer and skater Rich Lacey, professional surfer Emily Currie, hellman Jayce Robinson, Masked Ball creator and restauranteur Kelv Batt, Lucas Skinner – Ben’s 11 year old lad who completed a staggering 12 miles on his prone paddle board, and artist and photographer Mike Lacey (who conceived the project) to paddle from Porthcurno on mainland Cornwall to the Isles of Scilly.

We often hear about people whose lives revolve around the sea, but Mike is, though he wouldn’t say it, the real deal in this regard. Mike’s Waves surf art gallery is a living record of his work: swimming out with the camera into the heaving, lonely Atlantic winter swells to capture scenes that only he, and a few seals would ever get to see. Like all of us, Mike has acknowledged the problems of marine litter and resolved to take action via a project to generate funds for Surfers Against Sewage, the grass roots movement that has been crucial in tackling marine pollution since the late 80’s, when they famously influenced legislation in the House of Commons to keep UK bathing waters free of sewage – a sea change which is likely one of the biggest reasons that the South West UK has an ocean sports industry today. Mike’s vision was to bring together the crew of paddlers under the wing of a mighty support boat helmed by John at Shark Bay Films, to make the crossing, to film it, and to build a board for it. Over a period of eight months, Mike built the hollow-framed open water sup board – his first one – that would serve as his vessel for the 32 mile crossing. It was suitably named, The Endeavour. This endeavour was completed at some point in the late summer of 2018, but since then, the wider project sat in incubation as the window of opportunity slammed shut for a few months with the arrival of the unheralded, insane Cornish surf winter and spring season of 2018/2019 that meant the Celtic Sea would be off limits to mere paddle craft.

It was a Friday in early July this year when Alan Stokes told me that the paddle would be ‘on’. ‘Great!’ I said. ‘When?’. Al replied, ‘Monday, we leave at 6am’. All right, quick cancellation of all weekend plans, try and find cover for work on the Monday, and most importantly, make sure I had all the right kit where I needed it. There was no time to rest up or to think too deeply about it, and on Sunday night after we dropped our kit off at the boat moored at Newlyn, I didn’t sleep with the excitement.

Last minute details and requests for kit and info were falling in fast on the Whatsapp chat; for example that camel-back that seemed so healthy just last summer was now full of botulism in a dark corner of the garage.

In the fading dawn we assembled on the hallowed shores of Porthcurno Beach; famous not just for its white-sanded beauty and open air-theatre high in the cliffs above, but more importantly for its pivotal role in international communications: the undersea cable that linked the UK to India terminated here, and two tunnels excavated by local tin miners shielded important telecommunications equipment during the second world war. The oily-calm Atlantic stretched away before us, probably just as it looked for Charles Darwin when he set sail on The Beagle, or The Mayflower when it sailed for America, or even for Sir Frances Drake himself before he circumnavigated the globe.

Though we wouldn’t be going quite so far, there was a palpable sense that that same westward-facing ambition of our seafaring ancestors was right now coursing through our veins.

The first few hours as we pulled away from Longship’s Lighthouse off to our north, and then the distant but foreboding Wolf Rock Lighthouse (so called for the terrifying howling sound the wind makes over the rock during storms) to the south east, were fascinating. We saw the ocean change from turquoise to blue-black, saw our homeland slipping away behind us, and like some waterborne version of Canterbury Tales drifted in and out of conversation with one another as to our motivations for the crossing, what we would be toasting ourselves with once we were in the pub on the islands. It was around six hours in that it started to bite. Most of the crew were on 13’0 inflatable touring boards, some had nylon bladed paddles, and the easterly wind that we’d hoped would push us along had been north by northwest the entire time, forcing a ratio of about 1000:1 left-to-right hand paddle strokes. Due to our pace, we’d already experienced the full tidal range and as it turns out the huge expanse of the shipping lanes sit right in the middle of the ‘overfalls’ – standing waves created by the ever-dragging tide. Alan and myself were on 14’0 rigid boards and were tasked at the start with leading the group, although for the first part all we had to do was follow the boat. The difference in our boards meant that our natural paddling rhythm but us about 1kt faster than the others, so several times we had to drop into a holding pattern, nose into the chop, holding steady will the group reconnected. So although our course over ground was 32 miles, I think we paddled around 40 miles through the water.

In the endless expanse of sea colours began to change, blue started to look orange, any sense of forward motion was now replaced by constant rocking, strange shapes passed below us in the water. Dolphins! A pod of beautiful common dolphins had obviously sensed our downer vibes and came along for a play, rolling under our boards, poking their beaks up and giving us a much needed lift. This is what we were here for, adventure, isolation, wild nature. This boost spread via the radio as we called through to the boat and Mike who was leading main pack; we could hear their hoots over the airwaves before their real sound reached us. Not long after the grey smudge of the Isles of Scilly appeared on the horizon, meaning we could now navigate by dead reckoning, freeing John on the boat up to shepherd the main pack.

Ben Skinner, on a wide inflatable 13’0 tourer, was now keeping pace with Al and myself. A world-class longboarder, Ben is a born paddler. If you put him on a 14’0 race board for three months he’d be devastating on an international level. We could now make out distinct landforms on the horizon. Our water and fuel supplies looked to have been planned to Nasa-like tolerances. Al annihilated a pasty thrown to him from the boat, I downed my final Lucozade Sport and Ben gulped a tube of carbo-gel.

Simultaneously and without saying it, each of us realised that one of us would be the first man across – and each quite fancied that honour. The pace picked up. And again, till we were all in full sprint mode, blasting through the last of the glycogen reserves and hoping that soon fat burning, or a miracle might take over. Of course neither did and after an hour of hell, the islands no closer, we fell back to a sensible pace just in time for another cruel tide to drag out and try to pull us back to Cornwall. Idiots. After 11 hours on the water, all eleven of us drifted into Hugh Town on St. Mary’s, the largest island in the archipelago. On the beach, walking was impossible and most of us toe-punted rocks trying to find our balance. Word had got out about the crossing and holiday makers tried to ask us about it, but it we could barely speak in full sentences. It was going to take a while for this to sink in.

That night, we lay in our campsite, bellies full of pub grub and the soft analgesic of local ale at last having an effect. The milky way exploded above us in the dark Scilly sky and the warm island breeze blew gently on our faces. This was definitely type two fun, when at the time you don’t realise what a great time you’re having, but given enough distance, you know you’ll just have to do it again. SUP International