GRANT AND BLACK  TAKE No.1  SPOTS

NSP is today humbled by the performances of two of its team riders who achieved the most amazing results in the world’s most challenging paddling race.  Every sport has its pinnacle, in ocean paddling that is crossing the Kaiwi Channel between Molokai and Oahu.  Surviving is one thing, beating the world’s best paddlers in a race across it is another altogether.

Travis Grant and Terrene Black achieved something that all but the world’s finest paddlers only dream of; they both won their Elite Unlimited SUP divisions in the Molokai 2 Oahu World Championships.  In doing so NSP would like to take this opportunity to congratulate them both on this remarkable achievement.

“I’m just so relieved it’s done. Conditions were so tough. It was a battle the whole way with Andrea and Jenny.  Once I took the lead, I just tried to put the hammer down.  Somehow I managed to stay in front.  I’m so stoked!!”  said Terrene Black who joined the NSP team only hours before flying to Hawaii to prepare for this major race. 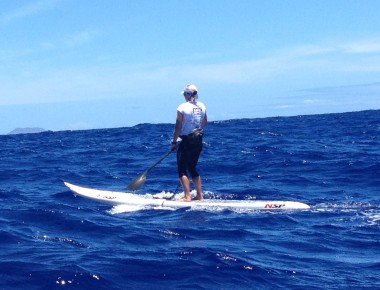 “Honestly I wasn’t lining up thinking that I would win.  I just sort of ran my own race, did all the little things right, and came out on top.  I can’t believe it.  There are no words to describe how you feel after winning one of the hardest races in the world.  A huge thank you to Billy Robello & Marshall Rosa for the board and the fantastic escort.  Also Thank you to NSP & Australia for your support!” said an elated Travis Grant after the win.  Travis’s result also follows a string of other major wins following his return from injury at the end of 2012.

Once again we congratulate Travis and Terrene for their respective achievements and sincerely thank their whole support network, families, skippers and boat crews who’s commitment is required to compete and ultimately be competitive in races like this one.