I must admit, when I looked for a perfect downwind spot in Europe, I didn’t immediately think of Greece. The French Atlantic coast sounded promising. Or Portugal. Until I saw some videos by John and Kostas Spinoulas, two passionate and skilled downwind paddlers who had discovered several downwind spots along the coast of Attika and on Corfu. Wind, waves, whitecaps and warm water. I knew I had to go.

For someone who lives in Switzerland, a landlocked country, I have an unusual passion. I love stand-up-paddleboarding on lakes and rivers, but nothing excites me more than downwind paddling in the sea. The freedom I feel in open water, the fun I have when I catch a glide and the changing shapes and colors of the water underneath me give me a deep sense of joy and happiness.

That’s why I’m going back to Hawaii for my fifth Molokai to Oahu crossing this summer. This race, known as the M2O, is my addiction. Crossing the channel between the two Hawaiian islands is such an adventure. Nothing I’ve ever experienced compares to paddling in the deep and blue waters of the Kaiwi’i channel. Yet training on flat water in Switzerland doesn’t exactly prepare me for the challenges I will face on race day. That’s why I was looking for a place to hone my open water skills – and found it in Greece.

When I contacted John Spinoulas to ask if I could train with him and his brother Kostas, he didn’t hesitate. “Of course!” he replied. I booked a flight and Aqua Inc.’s founder Alexander Mettes shipped my board, the 14-foot race board Siri Pro, to Athens. John picked me up from the airport, his and my board already loaded on top of his car. About half an hour later we were on the water, playing in turquoise waves and catching some bumps that became steeper and more fun as the wind picked up during the afternoon. “It’s going to get even better”, John said as he showed me the wind forecast. It looked good – a week of winds with between 25 to 30 km/h and gusts of up to 60 km/h lay ahead.

“I’m going back to Hawaii for my fifth Molokai to Oahu crossing this summer. This race is my addiction. Yet training on flat water in Switzerland doesn’t exactly prepare me for it, so I was looking for a place to hone my open water skills – and found it in Greece.”

Coming to Greece was special because the company whose boards I ride has a strong connection to the country. Aqua Inc., a SUP and surfboard manufacturer based in the Netherlands, was conceived in Halkidiki, Greece, almost 20 years ago. The turquoise waters and the beauty of the surroundings inspired Alexander Mettes to start his own business. Acknowledging the influence of the Greek peninsula on his decision, he chose to make Halkidiki part of the company’s name. Initially, the company focused on clothes for people who love to be near or on the water but over time, high performance SUPs have become Aqua Inc.’s main business. 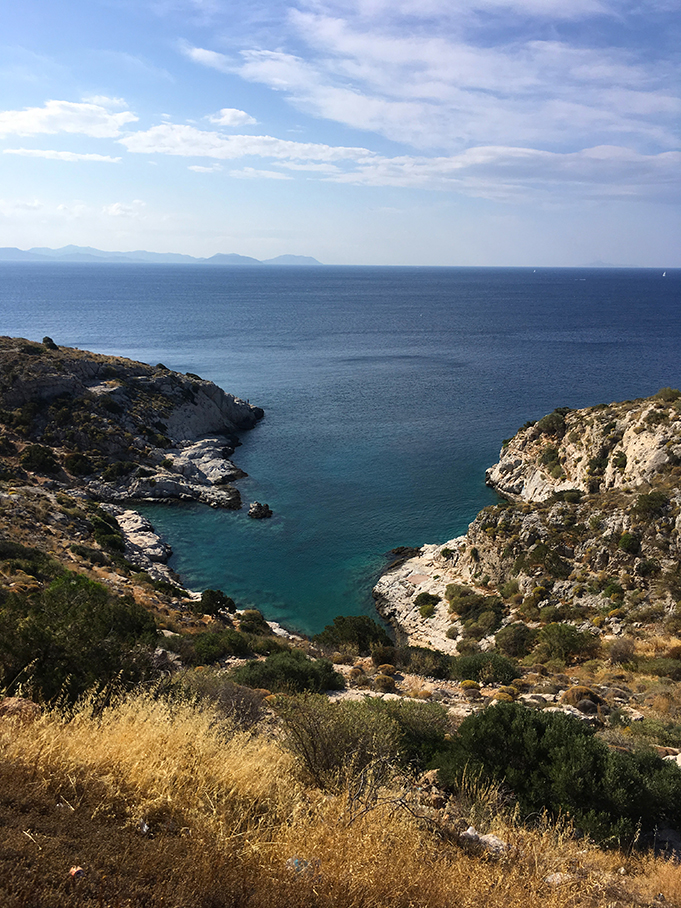 The next day, the wind was coming from the North/Northeast. Perfect for a seven kilometer downwind run along the coast of Attika. We drove to Nissakia, our starting point. As soon as we left the urban landscape of Athens behind us, the sea sparkled in beautiful shades of blue. Bars, windsurf and kite spots, boutique hotels and resorts lined the coast. No wonder this area is known as the Greek Riviera. Perfect for getting some deliciously strong coffee before hitting the water. I was curious to see how my board would perform in downwind conditions. Designed as a fast flatwater board, I wanted to see if the shape worked in the Mediterranean sea as well.
The narrow nose, I believed, would pierce through the bumps without slowing the board down too much. John, Kostas and I paddled out, passing wind- and kitesurfers. Just like us, they were enjoying the North wind, known as Meltemi, that makes a regular appearance during the summer months.

“Over the next few days we enjoyed the great conditions on the Loutsa downwind run again and again, sometimes slowing down to work on technique and timing, at other times speeding up like first-graders running out of the classroom at recess.”

After a few hundred meters, it was time to bear off with the wind and head down the coast. John who is much more experienced in downwind paddling stayed close by, pointing out unique landmarks along the coast of Artemida Bay. We had a blast catching bumps, feeling the boards accelerate under our feet, picking up energy from the wind and waves. “It’s going to get even better”, John said. He was right. After about four kilometers the color of the water changed to a deep emerald green. The waves became steeper over a reef and more fun to ride. It was perfect, except maybe for the occasional bump that bounced back from the coast and – every now and then – tried to knock me off my board. No problem in the warm water.

“This could go on forever”, I thought. I was having so much fun. The board performed well and I enjoyed the speed of the bumps I was catching. After paddling on flat water for many months, this was a real treat. “This is where we get out”, John said, pointing toward a wind-sheltered bay to our right. As we approached the entrance to the bay, a little island with a white and blue windmill came into view. It looked like it had been taken right out of a postcard. I was smiling as we approached the soft sandy beach that marked the end of the first downwind run. But, of course, not the last one. We had teamed up with some surfski paddlers, loaded the cars and went up the coast again to go for the next downwind run.

Over the next few days we enjoyed the great conditions on the Loutsa downwind run again and again, sometimes slowing down to work on technique and timing, at other times speeding up like first-graders running out of the classroom at recess.

It was great to spend as much time as possible on the water, but Athens is also a perfect destination for anyone who wants to combine training with sightseeing and cultural experiences. When we were not paddling, John and Kostas showed me the most picturesque, famous and interesting neighborhoods of Athens. We visited the ancient sights, the Acropolis and had delicious traditional Greek food in one of the many restaurants. A connoisseur of street art in Athens, John pointed out the works by graffiti artists that I otherwise would have missed.

On my last day in Athens, the wind dropped. We decided to paddle out to an island a few kilometers away and back. It was a change of scenery and pace and a perfect ending to a perfect week. On the way to the airport, we made plans to explore other parts of Greece and find new downwind runs. I can’t wait to go back. SUP